The Barbarian is a melee-oriented class witth great physical powers, and uses fury instead of mana as a resource pool.

The class also exists for Diablo II and Diablo I:

The Barbarian character himself is the same individual from Diablo II.

It is said that when the world was very young the tribes of the Northern Steppes were given sacred charge. Somewhere deep within the great mountain Arreat, lies a source of great power, crucial to the well-being of all humanity. The tribes act as guardians of this artefact, and through this sacred duty, have shaped their way of life in observance of this power.

Steeped in mystery and tradition, these people refer to themselves as the Children of Bul-Kathos, the great and ancient king. To better protect their lands from outside forces they adopted a nomadic lifestyle, frequently moving within the confines of the Steppes and maintaining few permanent settlements. Isolating themselves from the world outside their territories, they eschew the use of magic and complex machinery, as they believe these things can only weaken the resolve developed over so many years.

The Children of Bul-Kathos have developed a kinship with the land and have learned to harness the primal energies in nature to enhance their own substantial physical prowess. Because of this, and their freedom from the trappings of the outside world, the Western Kingdoms has historically referred to these tribes as barbarians, an epithet that belies the rich cultural and spiritual history these people possess. Although some trade with these curious folk, they do so only along the outmost borders of their lands. All intrusions into the territory surrounding Mount Arreat are forbidden, and warriors from the northern tribes are quick to thwart any incursions.

Every attempt at conquest has always been met with fierce and decisive resistance in an account of one skirmish, hordes of Barbarian tribesmen silently appeared where none had been but moments before. Their bodies painted in mysterious designs, the tribesmen descended on the invaders, howling as the charged like the fierce mountain winds. Fully half of the trespassing soldiers immediately dropped their weapons and fled, the remainder were set upon by the Northmen with a fervour that none of the battle-hardened invaders had ever witnessed. No quarter was asked and none was given, but in the end, when the outlanders sounded a full retreat, no chase was given either... at least none that could be observed.

A number of Barbarians started roving the lands outside the Steppes, prepared for war and seeking information regarding the recent activities of the Prime Evils before the conflict that ended with the destruction of the Worldstone and Mount arreat.

In his personal history the Barbarian defeated Baal, only to learn from Tyrael that the Worldstone was corrupted and would have to be destroyed. The destruction of the Worldstone blasted Mount Arreat to rubble, destroying the remainder of Baal's army and saving the Barbarian lands from their invasion.

Twenty years later, when Diablo III takes place, the Barbarian lands are largely deserted, and the only remains of Mt. Arreat, formerly the symbol of the lands and the source of the Barbarians' spiritual strength, is a huge crater.

More than the physical damage, the events detailed in Act Five of Diablo II devastated the Barbarian culture. The Barbarians gained their identity and cultural pride from protecting the Worldstone within Mount Arreat. To see it defiled by Baal and his minions, and then destroyed, tore out the heart of these proud people. They abandoned their homeland and became nomadic, wandering the lands of Sanctuary and pitching themselves into battle after battle in an effort to forget the pain of their shattered homeland.

Abd al-Hazir visited the Barbarian lands and wrote about his experiences and observation in the 25th entry of his writings. It sets the stage for the story we'll learn when playing the game.

The Barbarians consider it their sworn duty to protect Mount Arreat and the mysterious object within. They believe that if they fail to uphold their duty to the great mount, or are not given a proper burial upon its slopes, they will be denied a true warrior's death, and their spirits shall roam the land without honor for all eternity.

If there are any barbarians left alive, they must truly be without hope. Perhaps this is the genesis of the rumors of monstrous things reported to resemble the barbarians in size and ferocity, but that are in reality nothing more than unreasoning, inhuman beasts. Could the destruction of not only their home but also their very beliefs have actually brought this magnificent race so low?

The female Barbarian is identical in ability to the male, but her origin story is a bit different. She's younger and is not a female version of the same individual who defeated Baal in Diablo 2. She's a new warrior, one who was motivated to go forth into battle since the men weren't getting the job done.

The Diablo III Barbarian is an evolutionary improvement on the Diablo II Barbarian. He (or she) retains some of the same skills, such as Whirlwind and Leap Attack, but has a variety of new skills to unleash on her enemies. One of the features of the class is also Fury, which is an alternative resource to mana for Barbarians. Instead of a globe of energy that needs refilling, it's a meter of the pure anger the Barbarian feels in combat, slowly building up as she deals or receives damage. Fury allows her to pull off extraordinary feats with skills that require Fury.

He (or she) is bigger and better. There's a great emphasis on power and destruction; on wanting every movement to look massive and devastating. It's a violent, crushing style, and she exudes power and devastation with her every movement. The D3 Team spoke about the character concept during the WWI 2008 panel titled Denizens of Diablo. 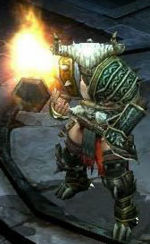 This is actually the same individual from Diablo 2. He's aged twenty years, and he's got a personality in this game. Look at his gear; his armor has points on which he could impale himself. It's extra protection for the harsh environment, but it's also dangerous to him. The day to day life characters lead in this world is very hard.

With the Barbarian, we had to updating a classic. The Barbarian was exciting for us to work on -- to take a classic char we all love to play and bring him back to life. What's this guy been doing for the past 20 years? This guy's 8 feet tall and 300 lbs of pure muscle. He saw things during the events of Diablo II that would have killed most people, but he's still around. In D3 we aged him, grayed his hair, gave him some scars. We think those elements help sell the story visually. Signs of age, how he wears his armor. All that helps us tell the story visually.

It's also an interesting concept to have the same character return in D3, as a grizzled veteran of countless conflicts, as a grown man who defeated the three Prime Evils twenty years ago... and who starts off D3 at level 1, without the ability to do much more than swing an axe.

Why Repeat the Character?[edit | edit source]

The Barbarian was not intended to come over from Diablo II originally. A character with similar appearance and skills was planned, but everyone in the dev team started calling it Barbarian, and so they decided to call it that. Jay Wilson quote: [1]

One of the things we really did not want to do – it's why we set that initial goal to not repeat classes – was, we didn't just want a rehash; we wanted to make the sequel and the sequel has new gameplay and new experiences. I know a lot of people really love the classes in Diablo 2 and it's not my desire to intentionally arc those people – I like those classes to; I love the necromancer, he's my favourite class from Diablo 2 – but as our goal we really wanted to provide new experiences; that was our focus.

Jay did not disclose what the original name was.

Renowned for their awesome combat prowess as well as their arrogant demeanor, the Barbarians appear to be perpetually girt for battle. Through harsh conditioning, the Barbarians excel in physical combat and tremendous feats of strength. They derive their power chiefly from intense physical training, but also tap primal energies from the living world around them. They can manifest these or add to their already considerable catalogue of superhuman feats of strength and power. The barbarians call this power Fury.

The barbarian skills are arranged into to three distinctive skill tree categories:

The Battlemaster tree skills are focused on general combat, like Hammer of the Ancients and Furious Charge. Many of the skills enable the Barbarian, but it still includes passive skills.

The Berserker tree skills is similar to the combat skill tree, but focus more on violent behaviours like you would find in a berserker, like Whirlwind and Frenzy.

The Juggernaut tree skills also focus on combat, but more on the "stout fighter" type, with skills like Stunning Blows and Seismic Slam.

The Barbarian was first unveiled as the first ever Diablo III class at WWI 2008 in Paris, and has gone through a number of small changes since then. Some skills have changed name since the reveal, and the skill tree has changed drastically from the BlizzCon 2008 demo in October until May 2009. See more on the Berserker Skill Tree.