Way of the Hundred Fists

Way of the Hundred Fists is a Primary Monk skill unlocked at Level 15. The Monk attacks his enemies with a flurry of blows. 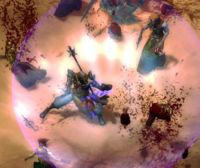 Way of the Hundred Fists in action.

As part of a Monk's training he strives to become more than just a fighter, focusing his mental energies to enhance combat speed.

The following is a very quick summary. See the Way of the Hundred Fists rune effects page for a more thorough description of rune effects, or any of the individual rune pages for numbers, screenshots, blue quotes, and much more.

The Monk dashes towards his target.

A video of Way of the Hundred Fists (as a combo) can be seen below, courtesy of the Diablo.IncGamers.com You Tube channel.

The following Monk passives provide a benefit to Way of the Hundred Fists, runed or not:

Way of the Hundred Fists was first shown at BlizzCon 2009 as one of the originals when the Monk was unveiled. Flux was able to try it out:[1]

This one was a blast to use, and was about the most fun Monk skill. It’s just straight out of an action movie, or some game like Tekken 3. The Monk does a short dash to the first punch, throws a flurry of blows for the second stage, and then blasts an explosive, AoE attack. It’s an excellent crowd killer, and when used on a monster marked with the Explosive Palm 3rd stage, it’s almost certain to clear the room.

This skill was one of the Monk's starting skills in the BlizzCon 2010 gameplay demo. Flux described it again:[2]

It was unnecessary, as well as Hands of Lightning was doing, but I wanted to compare the two. I hadn’t really noticed the skill levels at that point, and soon regretted my choice, since rank one Hundred Fists wasn’t nearly as effective as rank five HoL. Hundred Fists was more fun and flashier, with the Superman dashing first punch, and the ability to hit multiple enemies at once, but with just one point the damage was considerably lower than Hands of Lightning.

Skill tiers were removed shortly before the beta started in September 2011, and Way of the Hundred Fists became a level 21 skill. The skill system was once again overhauled for the Beta Patch 13 in February 2012, and Way of the Hundred Fists was classified as a Techniques skill and moved to level 27. For beta Patch 14, it was re-classified as a Primary skill, dropped to level 15, and buffed a bit.

See the Monk skill archive for more details on previous versions of Way of the Hundred Fists and other Monk skills.

Way of the Hundred Fists can be seen in action on video here: