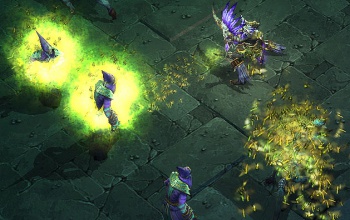 Locust Swarm is a Secondary Witch Doctor skill unlocked at level 21, which sends forth a torrent of locusts which swarm over and devour anything they meet. The Locusts converge on one target and if they kill it they will chain to another target, potentially spreading their damage over a large number of enemies.

The Witch Doctor sends a swarm of locusts to literally devour the flesh of his enemies.

The following is a very quick summary. See the Locust Swarm rune effects page for a more thorough description of rune effects, or any of the individual rune pages for numbers, screenshots, blue quotes, and much more.

A really nice skill against packs of monsters, working like a disease that affects one monster and then the rest of the group. It can spread quite fast, so casting this spell just once is enough, and by the time it is done, you would have used a few other skills. Enemies who are killed by Locust Swarm leave behind a skeleton, a most pleasant visual effect.

A video of Locus Swarm in use can be seen below, courtesy of the DiabloInc You Tube channel.

The following Witch Doctor passives provide a benefit to Locus Swarm, runed or not:

Locust Swarm premiered with Diablo III in the WWI 2008 gameplay video as a Tier II skill in the Plague Skill Tree (later renamed the Zombie Skill Tree). The first version of this skill could be cast on Mongrels, enhancing them with poison damage.

By BlizzCon 2009, Locust Swarm had been moved to Tier III in the Voodoo Skill Tree and could no longer be cast on Mongrels (renamed to Zombie Dogs). Flux discussed its utility:[1]

The skill isn’t that damaging, but the way the locusts can spread from target to target makes it fairly amusing to use in large crowds. This one might have long term viability, even if the damage is negligible in the end game, simply as a sort of poisonous AoE attack.

At BlizzCon 2010, Locust Swarm was still in the game (moved up to Tier 4 in the new tree-less system), but wasn't one of the Witch Doctor's starting skills.

Skill tiers were removed shortly before the beta started in September 2011, and Locust Swarm became a level 19 skill, too high to try out. The skill system was once again overhauled for the Beta Patch 13 in February 2012, and Locust Swarm was classified as a Secondary skill and move to level 20. For Beta Patch 14, it was slightly nerfed, but (strangely) for Beta Patch 15, it was considerably buffed, as well as moved to level 21.

Locust Swarm can be seen in action on video here: