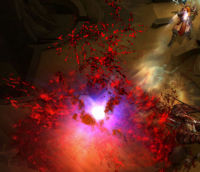 Exploding Palm (or EP) is a Techniques Monk skill unlocked at level 13. The Monk inflicts internal damage that causes the target to take damage over time, and to explode dealing huge damage to nearby enemies if it dies while the DoT is in effect.

During D3v and the early months of RoS, this skill had a Crushing Blow type effect, so that a monster that died while marked by the EP would explode and deal a % of the monster's maximum hit points to all nearby enemies. This was a hugely-powerful ability which Blizzard came to feel was overpowered at the highest difficulty levels, especially during Patch 2.1 testing when Greater Rifts were enabled, and Monks were able to complete GR level 100 by exploiting the massive percentage-based damage of EP.[1]

Thus the developers reworked the skill in Patch 2.1 on the PTR in early July 2014, taking out the percentage based damage and replacing it with a very high weapon damage. [2]

The skill remains strong, and may actually be more effective for players in lower difficulty levels, but prior to the nerf/change EP could deal billions of points of damage in very high level Greater Rifts.

A video of the early version of Exploding Palm can be seen below, courtesy of the DiabloInc You Tube channel. This does not represent how the skill works in the game any longer.

The following Monk passives provide a benefit to Exploding Palm:

Exploding Palm was first shown at BlizzCon 2009 as one of the originals when the Monk was unveiled. Flux was able to try it out:[3]

This was probably the coolest spell most people saw at Blizzcon, just for the massive blood explosions it created. It was magnificently overpowered, working like an early D2C version of Corpse Explosion. Triggering the third stage of this one, then beating that monster down with 100 Fists, was almost certain to clear any room, killing every monster anywhere near melee range.

This skill was indeed moved from Tier 2 up to Tier 5 for BlizzCon 2010.

Skill tiers were removed shortly before the beta started in September 2011, and Exploding Palm became a level 12 skill. The skill system was once again overhauled for the Beta Patch 13 in February 2012, and Exploding Palm was classified as a Primary skill and moved to level 11.

For Beta Patch 14, it was re-classified as a Techniques skill and moved to level 13. It was also significantly changed in function: previously, it was a Spirit Generating combo skill that dealt two weak hits, before the third placed the explosive curse effect on the target.

Exploding Palm can be seen in action on video here: