Details about Traits prior to their removal have been saved below for posterity.

Traits are passive skills. Points spent in these grant bonuses that affect other aspects of the character. Traits are not displayed in the skill listing, but are on their own separate Traits menu.

Unlike skill points, which are earned at every level up, Trait points are only awarded every other level. Only on odd numbered levels: 1, 3, 5, 7, and so on, up to 59.

There were only five traits listed for the Demon Hunter during her debut in the Blizzcon 2010 PvE demo. The class will have many more in the final game; all the other characters had around 30 in the Blizzcon 2010 build, though the developers said that might be too many and that some traits would likely be removed or combined to keep the total number from being overwhelming to players.

Click to the individual Traits pages for more details about the particular trait. Many common traits are available to more than one class. Traits become available in bunches, every 4 levels. 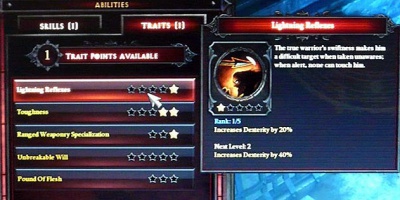 The level requirements of the earliest Traits are not known, since they were observed on level 9+ characters, for whom they were all already available.

None of these have been confirmed by Blizzard, but they are very likely to be given to the Demon Hunter, since they are possesed by all of the other classes.