Wall of Zombies in action.

Wall of Zombies is a Decay Witch Doctor skill unlocked at level 28. One of the more creative skills in Diablo III, WoZ causes a tightly-spaced line of zombies to erupt from the ground, blocking the progress of monsters and tearing apart any monsters that come into their reach.

This skill has some very creative rune effects which entirely change the form and function of the spell.

The Witch Doctor calls upon the undead to prevent the enemy from reaching him.

Refer to the Wall of Zombies rune effects article for a thorough description of all five rune effects, including screenshots, videos, and strategy tips. 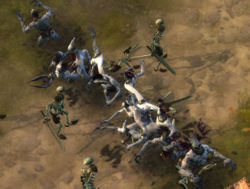 This skill was an immediate fan favorite and one of the best of the Witch Doctor's signature skills as it was original, creative, effective, and very illustrative of the class.

As there is no player collision at all in Diablo III, this skill does not block[1] the Witch Doctor or other players or their minions or pets from moving right through it. This prevents using the skill for griefing, but seems a little lacking in realism, to many players.

The following Witch Doctor passives provide a benefit to Wall of Zombies, runed or not:

Wall of Zombies was first introduced in the WWI 2008 gameplay video when Diablo III premiered. Back then, it was in the Voodoo Skill Tree, then moved to the Zombie Skill Tree. When skill trees were removed for the game, it became a Tier 5 skill.

Wall of Zombies has, throughout development, been too high-level to play, so there are no gameplay reports describing it.

Wall of Zombies can be seen in action on video here: