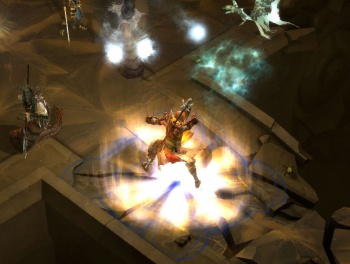 Inner Sanctuary in action, from 2010.

Inner Sanctuary is a Defensive Monk skill unlocked at Level 22. The Monk casts a rune on the ground that cannot be passed.

The Monk uses holy energy to create a protected region on the ground for a few seconds that can not be bypassed by enemies.

The following is a very quick summary. See the Inner Sanctuary rune effects page for a more thorough description of rune effects, or any of the individual rune pages for numbers, screenshots, blue quotes, and much more. 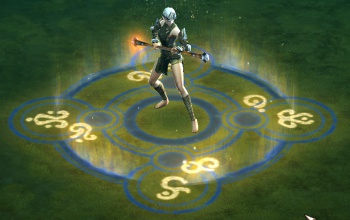 It is unknown as to how this skill functions with ranged projectiles, flying enemies, or boss fights.

The following Monk passives provide a benefit to Inner Sanctuary:

Inner Sanctuary was first shown at BlizzCon 2009 as one of the originals when the Monk was unveiled. Flux discussed its use:[1]

When cast, this skill creates a large rune on the ground, with a Stop Time-like bubble shield in the middle of which stands the Monk. It appeared to be impermeable to melee attackers; the Fallen I used it against couldn’t penetrate, at lest. They could reach through it, though. A Fallen Overseer had enough range to whack me with his improvised pole arm, as I stood in the center, immediately after casting it. Regular Fallen could not though, and just stood ringed around the exterior, waiting their turn.

It wasn't needed in that demo, since the Monk was hugely powerful, but there may be more utility for it in the final game.

Skill tiers were removed shortly before the beta started in September 2011, and Inner Sanctuary became a level 11 skill. The skill system was once again overhauled for the Beta Patch 13 in February 2012, and Inner Sanctuary was classified as a Defensive skill and moved to level 22.

Inner Sanctuary can be seen in action on video here: