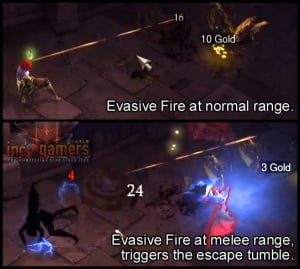 The Demon Hunter shoots a high-powered shot; if an enemy is too close, she also backflips away.

The following is a very quick summary. See the Evasive Fire rune effects page for a more thorough description of rune effects, or any of the individual rune pages for numbers, screenshots, blue quotes, and much more.

Evasive Fire will not free you from a Jailer's prison but it will from a Waller's wall.

The following Demon Hunter passives provide a benefit to Evasive Fire, runed or not:

Evasive Fire was first seen at the July 2011 Press Event, where it was a level 3 skill. Unfortunately, no information about the skill's function was available.

Evasive Fire can be seen in action on video here: