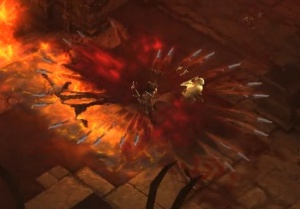 Fan of Knives in action.

Fan of Knives is a Devices Demon Hunter skill unlocked at level 17. The Demon Hunter quickly whips around in a full circle, sending out a nova of blades that hit all targets in range, many of them multiple times.

The Demon Hunter magically summons a wealth of blades, distributing them in a spinning arc, damaging and slowing enemies within close-range, similar to the nova spells from Diablo of yore. 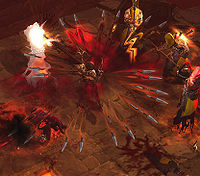 Fan of Knives may have the best D3 acronym yet.

Fan of Knives is a short-range area-of-effect ability that damages all of the enemies in range of the skill. This type of skill is best used either when surrounded by enemies or within close quarters where the enemies are bunched together to a point where the skill will penetrate deeply into the group. The knives also include a slowing debuff.

A video of Fan of Knives can be seen below, courtesy of the Diablo.IncGamers.com You Tube channel.

The following Demon Hunter passives provide a benefit to Fan of Knives, runed or not: 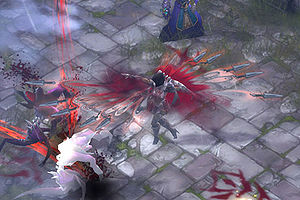 Fan of Knives was first shown at BlizzCon 2010 as one of the originals when the Demon Hunter was unveiled. Flux gave it a whirl in the demo:[1]

The real limiting factor of this one is the very short range of the knives. They did good damage, but the range was barely beyond melee reach (not that the DH was using melee weapons), and it was fairly mana-expensive. As a result, this one was only worth using when you had at least two or three enemies at very close range. The perfect situation for it was a circle of Vessels, and I enjoyed killing all 6 or 8 Vessels in such scenarios several times with this skill. It took 2 or 3 FoKs to finish them all, but this was the fastest and most effective skill against those clusters of enemies in the entire demo.

As many fans noticed upon announcement of the Demon Hunter and getting to see her skills for the first time, Fan of Knives is a returning skill from previous Blizzard games, namely WarCraft III and World of WarCraft. In WarCraft III, it was an ability used by the "Warden" hero character, and in World of WarCraft it is a level 80 ability used by the Rogue class. Fan of Knives appears to be making a niche within the Blizzard pool of spells and abilities, such as other spells like Teleport, and Blizzard.

Fan of Knives can be seen in action on video here: