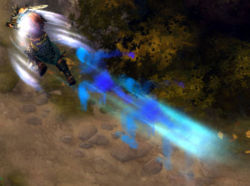 Furious Charge is a Might Barbarian skill unlocked at Level 21, which causes the Barbarian to charge at a targeted enemy, causing damage to the target and all enemies in his path.

The Barbarian charges at an enemy, toppling anyone foolish enough to stand in his path.

Furious Charge is a good skill for escaping tough situations, running in with a bang or killing a particular monster behind frontal lines. The graphics of this skill make using it a lot of fun, and it's quite damaging to enemies. Having a weapon with high damage will make this skill better compared to dual wielding.

The following Barbarian passives provide a benefit to Furious Charge, runed or not:

The following Barbarian passives provide a benefit to Bull Rush:

Furious Charge was first seen in the WWI 2008 gameplay video, where it was a Tier V skill in the Battlemaster Skill Tree. This version dealt 120% weapon damage to the target and 80% weapon damage to enemies in the way at rank one.

The stats of this skill were reduced slightly for BlizzCon 2009, but couldn't be played in the demo because it was too high level to pick. It couldn't be chosen at BlizzCon 2010 either, so there are no gameplay reports detailing any use of it.

Skill tiers were removed for the July 2011 Press Event, allowing skills to unlock steadily from levels 1 to 30. Consequently, all skill levels were adjusted and Furious Charge became a level 16 skill.

Furious Charge remained at level 16 when the beta started. With the Patch 13 changes, it was classified as a Tactics skill and moved to level 21. For the Beta Patch 14, it was re-classified as a Might skill.

Furious Charge is an updated version of Diablo II's Paladin skill Charge. That skill did damage to a single monster after rushing at it, and included knockback.

Furious Charge can be seen in action on video here: