Cleave is a Primary Barbarian skill unlocked at Level 3, which hits all enemies 180 degrees in front of the Barbarian for extra damage.

The v1.0.4 patch buffed the base skill considerably, as well as adding additional bonuses to the Reaping Swing, Broad Sweep and Gathering Storm rune effects.

The following is a very quick summary. See the Cleave rune effects page for a more thorough description of rune effects, or any of the individual rune pages for numbers, screenshots, blue quotes, and much more. 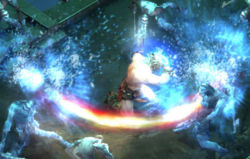 A close up of Cleave, notice the red curve representing cleave. The blue "orbs" are from the hits of the frost enchanted axe. 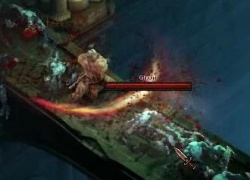 Cleave is a good skill to hit multiple enemies, it works with all combination of weapons, including a weapon and a shield, a duel wield combo or one big 2-handed weapon. It is unclear what factors the % damage on Cleave, is it Weapon Damage? or the resulting damage that a normal hit would've done? Make assumptions at your own risk.

With the latest changes in Fury mechanics, this skill would end up generating more Fury than was initially spent. Here are cleaved Goatmen. You can see the graphic distortion as well as the red lines from swinging a cleave.

A video of Cleave in use can be seen below, courtesy of the DiabloInc You Tube channel.

The following Barbarian passives provide a benefit to Cleave, runed or not:

The following Barbarian passives provide a benefit to Scattering Blast:

Cleave was introduced in the WWI 2008 gameplay demo, where it could be found in the Juggernaut Skill Tree at Tier II. At the time, it would hit for 130% weapon damage on 2 enemies at rank 1, with weapon damage and maximum number of targets scaling per rank.

For BlizzCon 2009, Cleave had been slightly re-balanced with slightly less damage, and had also changed appearance slightly between the WWI gameplay video and the later demo. Strangely enough, the animation has been made less overwhelming, only cleaving in one direction, when the older one swung in both directions. Flux still enjoyed using it:[1]

Probably the most useful active attack skill the Barbarian had in the Blizzcon build. I used this one most of the time, especially when I had a group of enemies, and it cut right through them. It dealt enough damage to replenish the fury it cost any time I hit two or more enemies, so I’d usually ignore single small targets, and try to swing towards several enemies, or would do some very simplified herding to group up Fallen Imps or other small targets so that one Cleave would take them all out, and boost my fury as well.

By BlizzCon 2010, the only change to Cleave was the removal of skill trees. Flux shared some new insights on using it in his hands-on report:[2]

Cleave with the spear was extremely effective. It bumped up my damage enough that I began to one-hit kill virtually all of the regular monsters, and that was very fun. I’d usually run up to groups of 4-8 monsters, let them crowd in close, and then cut the whole damn bunch of them down with a single swing. Watching their bodies fly back like eviscerated ragdolls, was, to quote Jay Wilson, “Awesome!” It was all that “make the player feel godly” stuff they’re always talking about during the design panels, come to life. I was putty in their hands, and felt slightly dirty at being so easily manipulated.

Skill tiers were removed for the July 2011 Press Event, allowing skills to unlock steadily from levels 1 to 30. Consequently, all skill levels were adjusted and Cleave became a level 5 skill.

Cleave was dropped to level 4 soon after the beta started. With the Patch 13 changes, it was classified as a Primary skill and moved to level 3.

Cleave was probably inspired by WarCraft 3, since the modifier that changes to "hit all enemies in front" is called Cleave.

Cleave can be seen in action on video here: