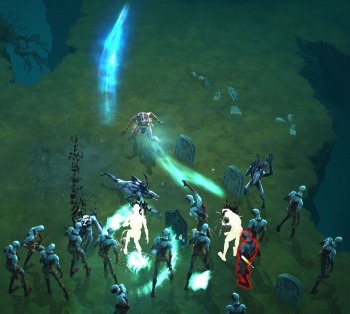 Haunt in action from the Beta.

Haunt is a Secondary Witch Doctor skill unlocked at level 12. Using it the WD fires a ghost at an enemy, dealing arcane damage over time. If the target dies the Haunt will jump to another nearby enemy, much as Locust Swarm does.

The Witch Doctor calls forth a malevolent spirit that deals damage to anything it possesses. This skill provides steady DoT, and can chain to affect multiple enemies.

Refer to the Haunt rune effects article for thorough descriptions of all five rune effects in this skill, including screenshots, videos, patch changes, and strategy tips.

This skill seems a pretty standard DoT spell, albeit being weak and working somewhat like a summon spell. However, if combined with other DoT effects, can cause the enemy to die rather quickly, as compared to casting Skull of Flame constantly to take out an enemy. It seems to last for quite a while when it finds an enemy, and multiplication should not be underestimated. Also, this skill doesn't seem to work like other summoning spells, as the spirit will vanish if no enemy is found.

The following Witch Doctor passives provide a benefit to Haunt, runed or not:

Haunt was first seen at BlizzCon 2009, where it was a Tier I skill in the Spirit Skill Tree. Flux was able to try it in the gameplay demo, but didn't find it very useful:[1]

Honestly, this skill was worthless in the Blizzcon build. Other attack skills did far more damage, far more quickly, and for less mana. This skill is it’s apparently meant to be used primarily to stop monster regeneration, and it will probably work against monsters that have immunities to fire or poison, the Witch Doctor’s main attack types. But it’s very odd that it’s placed in the first Tier, since it seems more like a support/specialty skill to use in the late game.

In 2010, it was moved to Tier 2 in the new tree-less system. Bashiok responded to complaints about the look of the skill (based on hardly being able to see it in a gameplay movie) by quoting one of the skill designers, Julian Love, in September 2010:[2]

Bashiok: Re: haunt, Julian wanted to pass along that the effect seen for the skill was “the most ridiculously temporary graphic ever.” It was never really intended to be shown in the state it was, so it’s all a bit embarrassing. But never fear as the skill itself is seeing an overhaul (technically and visually) to better deliver the concept of being haunted.

Although it was available in the demo at BlizzCon 2010, no known reports mention using it.

Skill tiers were removed shortly before the beta started in September 2011, and Haunt became a level 4 skill. Flux played it again, and found it much improved over the BlizzCon 2009 version:[3]

Haunt is extremely effective in the beta; probably too strong for such a low level skill. The only thing it’s not great for is quickly killing bosses, or quickly finishing off a huge mob. The DoT works nicely on bosses, but it takes a while, and while Haunt wreaks havoc on packs of monsters, this too takes a while. You can only have three Haunts out at once, each of which will rehaunt other nearby enemies when the first target dies.

Also during the Beta the graphics were spruced up considerably, with more color and swirling added to spice up what once looked more like a drab, light-gray swoosh of smoke.

Haunt can be seen in action on video here: