ADVERTISEMENT
From Diablo Wiki
(Redirected from Skull of Flame)
Jump to: navigation, search 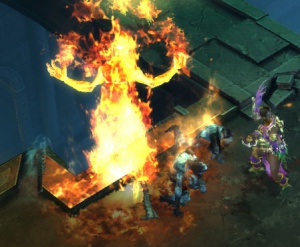 Firebomb is a Primary Witch Doctor skill unlocked at level 21. This skill (formerly called Skull of Flame) is a projectile that's thrown like a grenade. It bursts upon impact, dealing fire damage to the target and anything in the immediate vicinity.

The rune effects generally add to the radius of effect, increasing the AoE damage, without greatly altering the basic skill effect.

The Witch Doctor lobs a burning skull filled with combustibles at his enemies, which explodes violently when it breaks upon them.

See the Firebomb rune effects page for a more thorough description of rune effects, or any of the individual rune pages for numbers, screenshots, blue quotes, and much more.

This skill is quite useful, since it has good damage, nice range, and a very small cooldown. This makes Firebomb a good crowd control spell, especially in narrow corridors where enemies can be trapped in a hail of fire. The casting (throwing) rate is slower than some other Witch Doctor skills, and thus the damage/second isn't comparable for single target killing.

Upon explosion, the flames briefly form the shape of a large, menacing humanoid creature.

A video of Firebomb in use can be seen below, courtesy of the DiabloInc You Tube channel. 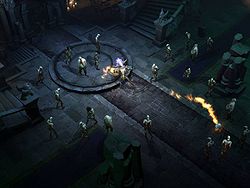 The following Witch Doctor passives provide a benefit to Firebomb, runed or not:

Firebomb (originally called Skull of Flame) was introduced in the WWI 2008 gameplay video. At the time, the skill was at Tier I in the Spirit Skill Tree. At BlizzCon 2009, Firebomb was located in the Voodoo Skill Tree but seemed otherwise unchanged. Flux found it to be very useful:[1]

Skulls can actually be thrown too far, in some exploitative ways. Several times I saw a pack of Fallen or other monsters on some ledge way of in the distance, in a location I was supposed to have to walk way down around some boulders and along narrow ledges and paths to reach. Yet I could freely hurl my firebombs to those locations, with perfect accuracy, and was able to kill enemies who had no way to fight back. Naturally, I did so whenever possible, if only to watch the Fallen scurry around.

By BlizzCon 2010, (after skill trees were eliminated) Firebomb had been moved way down the skill system, to Tier 5. It was one of the Witch Doctor's preset skills in the Battle Arena demo.

Skill tiers were removed shortly before the beta started in September 2011, and Firebomb became a level 11 skill. Flux tried it out in the beta, and seemed to enjoy it:[2]

One of the simplest Witch Doctor skills, and also one of the most fun to use, this one is just what it looks like. It’s a firebomb grenade, and you chuck them wherever you want to. There is some skill to using it; you have to learn what the maximum range is (you can’t throw it all the way to the side edges or corners), and it can be hard to hit advancing enemies since there’s some hang time and you have to lead the targets a bit. But it’s very visceral and blasty and awesome, just like Jay Wilson says.

The skill system was once again overhauled for the Beta Patch 13 in February 2012, and Firebomb was classified as a Primary skill (but remained at level 11). For Beta Patch 14, it was nerfed just a bit, but its casting cost was lowered enough to make it a spammable skill. For Beta Patch 15, it was bumped up to level 21, and also nerfed just a little bit more.

Firebomb can be seen in action on video here: