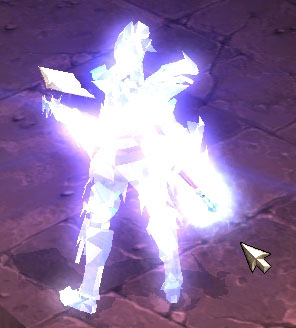 Diamond Skin as seen in the Beta.

This is one of the Wizard's most powerful defensive skills. Enabling Diamond Skin absorbs a great deal of damage for a short duration, making it something of a panic button skill, but one that will save the Wizard's life against sudden monster attack or other players in the Arena.

Calling upon Arcane forces, the Wizard can make her skin hard as diamond for short period of time.

Refer to the Diamond Skin rune effects article for thorough descriptions of all five rune effects in this skill, including screenshots, videos, strategy tips, and other related information.

Diamond Skin absorbs all types of incoming damage. The skill expires after the duration runs out, or sooner if it absorbs the maximum possible damage. There is a substantial cool down before it can be recast, and the short duration of effect makes it a skill that must be used in moments of extreme emergency, when it can be a literal life-saver.

The following Wizard passives provide a benefit to Diamond Skin, runed or not:

Diamond Skin was first shown at BlizzCon 2008 when the Wizard debuted. It was originally named Stone Skin and was at Tier II on the Conjuring Skill Tree. It absorbed 30 damage at rank 1, and appeared as a rough textured sort of graininess.

For BlizzCon 2009, Stone Skin was at Tier III and sported much improved damage reduction, as well as improved visuals. Flux discussed the new look:[1]

[Stone Skin] didn’t show up well on the slender Wizard. The new version is quite different and impossible to miss. The wizard is now sheathed in glowing blue crystals, almost like some superhero made from sapphires. In fact, the skill is so different in look that the team is probably going to rename it, though they’ve not settled on a change from Stone Skin, yet.

Soon afterwords, the development team did indeed change the name to Diamond Skin to better fit the new visuals.

Diamond Skin was one of the Wizard's skills in the BlizzCon 2010 PvP demo, where it was occasionally a life saver, but only if used properly, as Flux explained:[2]

At level 5 with a rune it absorbed 150 damage of any type, but the duration was quite short, so you had to cast it just before you needed it. Also, 150 sounded like a lot, but a Meteor or grinding Barb could do double that in a second, and Wizards with Diamond Skin on tended to feel invulnerable, and stuck around in dangerous, melee situations longer than they should have.

Skill tiers were removed for the July 2011 Press Event, allowing skills to unlock steadily from levels 1 to 30. Consequently, all skill levels were adjusted and Diamond Skin became a level 9 skill.

Diamond Skin remained at level 9 when the beta started. As a defensive skill, it didn't garner a lot of interest in the beta, but Flux suggested a possible use for it:[3]

Perhaps the most likely use for Diamond Skin would be in PvP, where a few seconds of damage mitigation could make or break a battle. You play defensively with a Wizard in the Arena, always dodging and firing from a distance and staying out of reach. But every now and then a Barbarian or a Monk will catch you; how delightful it would be to pop your Diamond Shield just as they unloaded, completely erasing their opportunity to do pain unto you.

With the Patch 13 changes, it was classified as a Defensive skill and moved to level 8. For March's Beta Patch 14, Diamond Skin's damage reduction was reduce by almost 50%.

See the Wizard skill archive for more details on previous versions of Diamond Skin (or Stone Skin) and other Wizard skills.

Diamond Skin can be seen in action on video here: