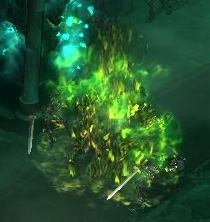 Acid Cloud is a Decay Witch Doctor skill unlocked at level 22. This skill is a DfA attack, spilling poison damage on any enemies in the targeted location. The poison comes from a sort of laughing Mardi Gras mask that appears briefly in the sky, and it leaves behind a toxic puddle that deals DoT and AoE as well.

The Witch Doctor creates a rain of acid over a small radius, dealing poison damage, plus poison damage to anything in the vicinity of the resulting toxic puddle.

Refer to the Acid Cloud rune effects article for a thorough description of all five rune effects in this skill, including screenshots, videos, and strategy tips.

This skill opens a hole in the air, pouring poison out on whomever is under it at the time. Pools of poison stay on the floor for about three seconds after, damaging enemies. The green goo from the poison looks a lot like the remains of the Witch Doctor's Plague of Toads.

If you ever hated the acid dogs from Diablo I, now you can wreak that acidic pain on others!

This spell was originally one of the Wizard's. It was switched to the Witch Doctor during early development. 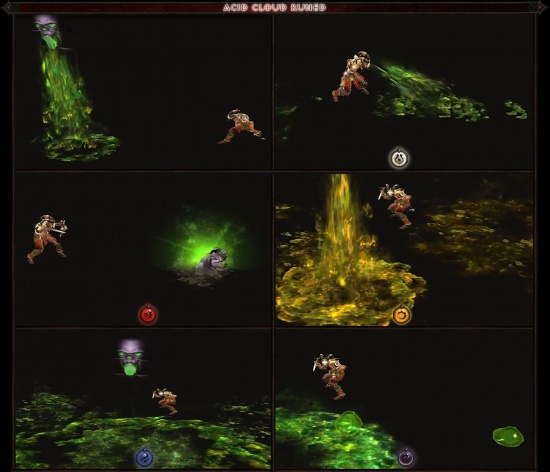 A video of Acid Cloud in use can be seen below, courtesy of the DiabloInc You Tube channel.

The following Witch Doctor passives provide a benefit to Acid Cloud, runed or not:

Acid Cloud was first seen at BlizzCon 2008 as a Tier III Wizard skill in the Conjuring Skill Tree. By BlizzCon 2009, Acid Cloud had been moved to the Witch Doctor's Voodoo Skill Tree, to the delight of many who thought using this skill was out of character for the Wizard. This move was alluded to by Bashiok shortly before the BlizzCon event[1]. Flux shared his thoughts on this skill:[1]

It’s an interesting description, and a pity we couldn’t see this one in action, to see just how the thrown bottle, explosion, and acid cloud was handled. So how long is the delay between the initial explosion and then start of the acid rain? Would a fast monster take only the 1-5 damage, and move out of the area before the more painful DoT Aoe began?

Skill tiers were removed shortly before the beta started in September 2011, and Acid Cloud became a level 22 skill, too high-level to play in the beta. The skill system was once again overhauled for the Beta Patch 13 in February 2012, and Acid Cloud was classified as a Decay skill (but remained at level 22). After being nerfed for Beta Patch 14, it was buffed some for Beta Patch 15.

Acid Cloud can be seen in action on video here: