Blizzard is a Force Wizard skill unlocked at Level 27, calling down shards of ice on opponents.

Blizzard is a spell found in every Blizzard game, and the function in Diablo 3 is about what you'd expect. Ice rains down from above, over a large area, damaging and slowing enemies below.

Calling upon the elements, drawing huge amounts of cold energy to the physical plane, a torrent of icy shards pelt an area directed by the Wizard.

Refer to the Blizzard rune effects article for thorough descriptions of all five rune effects in this skill, including screenshots, videos, strategy tips, and other related information.

Like a lot of other neat high level skills (most of them owned by the Barbarian) this one has been seen in videos, but never used by anyone other than at Blizzard.

Visually, a large cloud forms above the Wizard's enemies, from which large chunks of ice crash down to earth.

A video of Blizzard can be seen below, courtesy of the DiabloInc You Tube channel.

The following Wizard passives provide a benefit to Blizzard, runed or not: 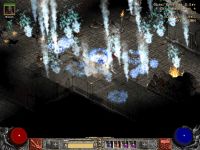 Blizzard was first shown at BlizzCon 2008 when the Wizard debuted, at that point a Tier IV skill in the Storm Skill Tree. It was a Tier V skill in the BlizzCon 2009 demo, which made it too high-level for players to select it.

Blizzard was again present in the BlizzCon 2010 demo, but still too high-level to play. Skill tiers were removed for the July 2011 Press Event, allowing skills to unlock steadily from levels 1 to 30. Consequently, all skill levels were adjusted and Blizzard became a level 26 skill.

Blizzard remained at level 26 when the beta started. With the Patch 13 changes, it was classified as an Arcane skill and moved to level 27. For March's Beta Patch 14, Blizzard was somewhat nerfed. Also, the category "Arcane" was renamed "Force".

See the Wizard skill archive for more details on previous versions of Blizzard and other Wizard skills.

Blizzard is a spell with a lot of heritage. The first version of this spell is seen in the classic WarCraft I from 1994 as a human Wizard spell (irony), and has been present in any Blizzard game (bar Diablo I) since. WarCraft II has it as a human mage spell, StarCraft doesn't have it, but has a very similar psionic storm, Diablo II has it as a Sorceress spell, WarCraft III has it as an Archmage hero ability and World of WarCraft has it as a Mage spell.

The principle is the same, with frozen shards dealing AoE damage, and is a staple spell in Blizzard Entertainment games that is unlikely to change any time soon.

Blizzard can be seen in action on video here: