Hammer of the Ancients

Hammer of the Ancients is a Fury-spending Secondary Barbarian skill unlocked at Level 2. 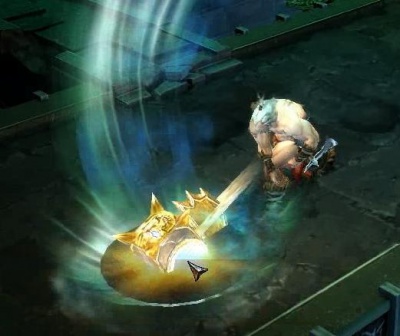 Hammer of the Ancients closeup.
This skill creates a mystic hammer which the Barbarian smashes down overhead in a melee attack that deals big damage to all targets in a small area. It costs Fury and thus can not be used indefinitely, but the huge damage to one or a few targets can make it a useful support skill.

Patch 1.0.4 buffed the base skill and added additional improvements to two of the rune effects as well:

The following is a very quick summary. See the Hammer of the Ancients rune effects page for a more thorough description of rune effects, or any of the individual rune pages for numbers, screenshots, blue quotes, and much more. 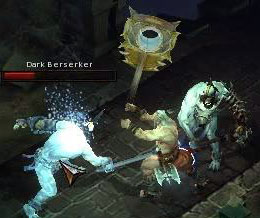 This is a really fun skill to use, and is very powerful. The increased chance to critically hit is assumed to increase the Hammer of the Ancients critical chance, instead of normal melee hits. It's a huge attack, and hits quickly, but the Barbarian takes a second to recover after the strike, leaving him vulnerable to nearby enemies. This looks like a skill that's best used against single large targets, rather than while swarmed. It's not clear if the strike will hit multiple enemies, or just the targeted enemy.

The following Barbarian passives provide a benefit to Hammer of the Ancients, runed or not:

Hammer of the Ancients was first seen when Diablo III debuted at WWI 2008. At the time, the skill was at Tier II on the Battlemaster Skill Tree; it dealt 100% weapon damage, an additional 2 physical damage and increased the damage of critical hits by 20% at rank one.

By BlizzCon 2009, this skill had gotten a small boost to all of its stats, and had been bumped up to Tier III. Aside from the removal of skill trees, this skill hasn't noticeably changed since then. Flux described using it at BlizzCon 2010 (or maybe BlizzCon 2009) as:[2]

The impact zone seemed very small, like a single monster in radius, which felt weird. Like it should be called Snow Shovel of the Ancients, with a narrow, blade-thin hitting end. As big as the hammer was, it should have had a crushing impact, capable of hitting multiple enemies in the area. Even basic Rank One Cleave did that, and with a much faster, more accurate, and less Fury-costly attack. 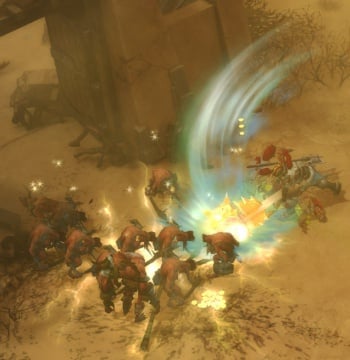 Hammering some Fallen.
Skill tiers were removed for the July 2011 Press Event, allowing the skills to unlock steadily from levels 1 to 30. Consequently, all skill levels were adjusted and Hammer of the Ancients became a level 2 skill.

Hammer of the Ancients remained at level 2 when the beta started. With the Patch 13 changes, it was classified as a Secondary skill (but stayed at level 2).

Hammer of the Ancients can be seen in action on video here: