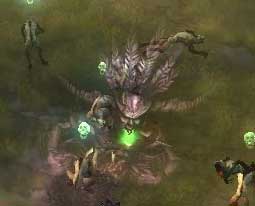 Horrify is a Defensive Witch Doctor skill unlocked at level 8. It's a sort of curse, frightening any enemies near the Witch Doctor into running away for a short time.

Fleeing enemies are just like characters forced to run by the Nightmarish elite modifier; moving uncontrollably away in a straight line and very vulnerable to being struck. If a monster moves into a corner while horrified, it will simply stand still, a sitting duck for any sort of damage until the duration of the skill wears off. In a way this skill can be thought of as a debuff that makes monsters vulnerable to attack, rather than a tool to actually make monsters run away.

Horrify works on players as well, and is a dangerous weapon in the Arena.

The Witch Doctor frightens away any enemies in his immediate vicinity. The spell is cast from the WD; it's not something you can target at an enemy some distance away, which makes it more useful for personal defense, but useless in most tactical situations.

Refer to the Horrify rune effects article for thorough descriptions of all five rune effects in this skill, including screenshots, videos, and strategy tips. 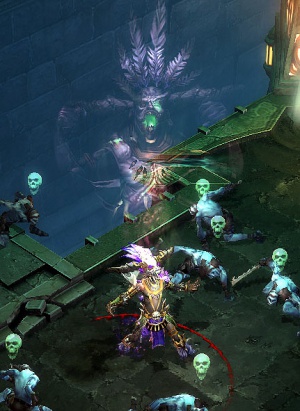 A useful skill if you are caught unprepared or are surrounded, buying precious time to retaliate. It can be also used to help out team mates who've been swarmed. Furthermore, players can try to take out a pack of enemies, damage them, horrify until other spells cooldown and try again.

Very useful for defending against melee attackers, whether monsters or in the Arena. It could be a life-saver when playing hardcore.

Enemies afflicted by Horrify show a glowing green skull over their heads, demonstrating why they are running.

A video of Horrify in use can be seen below, courtesy of the DiabloInc You Tube channel.

The following Witch Doctor passives provide a benefit to Horrify, runed or not:

Horrify was first seen in the WWI 2008 build. Besides moving from the old Voodoo Skill Tree to the Spirit Skill Tree, it stayed very much the same as of BlizzCon 2009.

It remained the same at BlizzCon 2010, where it was one of the default skills on the pre-made Battle Arena Witch Doctor. It was very useful in the Arena, mostly in case of sudden encounters with Barbarians, as Flux noted:[1]

One that I saw used seldom, but to great effect when it was. It utterly frustrated Barbarians, since just when they had the Witch Doctor lined up... they’d go running in the other direction, unable to control their character for a couple of seconds. If the WD were smart, he could actually lure in a Barb, Horrify him, tack on a Grasp of the Dead, release the hounds, and then and then blow them up. I never saw this done, but it was fun to imagine.

Skill tiers were removed shortly before the beta started in September 2011, and Horrify became a level 8 skill. Flux tried it out again, and found it to be pretty much a panic button:[2]

You’ve got to be very quick with your reactions to make this skill useful; the instant you cast it you’ve got to switch back to your attack skill and get some kills while they run away, or else run like an emo girl’s eyeliner. And even that might not work, since all the monsters move directly away from you, so you’ll probably be running right beside some of them, no matter which direction you choose.

Horrify can be seen in action on video here: