Sprint is a Defensive Barbarian skill unlocked at Level 16, which grants the Barbarian a movement speed bonus for a limited amount of time. 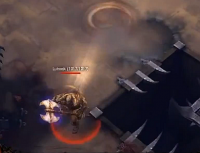 The Barbarian starts to sprint, catching fleeing enemies before they can escape. This is also a useful skill for Barbarians who wish to escape from their enemies with a burst of speed.

The following is a very quick summary. See the Sprint rune effects page for a more thorough description of rune effects, or any of the individual rune pages for numbers, screenshots, blue quotes, and much more.

This is a universal skill, Barbarians of all types should consider this skill for various reasons: to chase down fast moving enemies, to run away if things get tough or to just move faster through all areas. Although it does cost fury, and using this skill is limited to the end of the battle and some time after it.

First seen in BlizzCon 2009 demo, this skill is quite new. Other skills in this tree also give the Barbarian movement speed. It is unknown why the development team settled on having an active skill that gives movement speed, possibly to fasten the gameplay, especially in arenas. Notice the Barbarian leaves behind small tornadoes.

The following Barbarian passives provide a benefit to Gangway:

The following Barbarian passives provide a benefit to Run Like the Wind:

Sprint first appeared at BlizzCon 2009 in the Barbarian's Berserker Skill Tree at Tier II. In the gameplay demo, Flux didn't find much use for it:[1]

This one I kept forgetting about, until I was running across some huge stretch of already cleared out desert. Then it came in handy, but I never thought to use it to race into combat, or to boost my speed while in combat.

After skill trees were eliminated, Sprint reappeared at BlizzCon 2010 as a Tier 4 skill. Although it was one of Barbarian's skills in the PvP demo, there are no gameplay reports detailing the usage of this skill.

Skill tiers were removed for the July 2011 Press Event, allowing skills to unlock steadily from levels 1 to 30. Consequently, all skill levels were adjusted and Sprint became a level 23 skill.

Sprint was moved to level 24 for the beta. With the Patch 13 changes, it was classified as a Defensive skill and dropped to level 16.

Sprint is very similar to Diablo II's Barbarian skill Increased Speed. That skill, however, was a passive that boosted a Barbarian's speed all the time.

Sprint can be seen in action on video here: