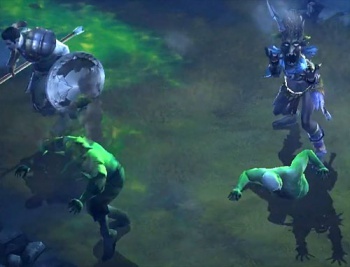 Zombies charge in a zoomed in Beta view.

Zombie Charger is a Decay Witch Doctor skill unlocked at level 14. It summons a zombie that charges forward, disintegrating rapidly into a poison cloud. Though the spell has a short range, the zombie deals considerable poison damage and has a piercing effect as it passed through and damages any number of enemies over the short course of its travel.

The base version of this skill essentially functions as a poison cloud that spreads disease to everything in a short path in front of the Witch Doctor.

The zombie is humanoid, but it disintegrates so quickly into a green smoke that it's hard to get a good look at it.

The following Witch Doctor passives provide a benefit to Zombie Charger, runed or not:

Zombie Charger first appeared at BlizzCon 2009 at Tier II in the Zombie Skill Tree, but wasn't implemented yet. At BlizzCon 2010, it was one of the Witch Doctor's starting skills, but was nearly useless unruned. Flux explained:[1]

It’s hard to use, since it has so little range; it’s hardly more than melee distance, and doesn’t work at the usual range a player assumes, a few paces behind the front line where the Mongrels are tanking. You have to learn to stand closer, almost at melee range to get any real effect from the skill. It’s not like a poison bolt, where as long as it gets to the enemy the full damage is done. The zombie doesn’t actually hit anything; it’s not a projectile. It’s just passes through them, trailing poison. So enemies it passes over and through take a lot of damage. Enemies it just barely gets to only receive a little splash of damage that hardly registers.

Skill tiers were removed shortly before the beta started in September 2011, and Zombie Charger became a level 5 skill. Flux tried it out again, and found it essentially unchanged:[2]

Zombie Charger is mildly useful in the beta, but only when aimed carefully and in certain situations. The skill creates a zombie that walks forward in a straight line, disintegrating into a cloud of green, poisonous smoke as it moves. The damage isn’t huge, but it can pass through multiple enemies if they’re very tightly bunched, and will deal the full damage to all of them.

The skill system was once again overhauled for the Beta Patch 13 in February 2012, and Zombie Charger was classified as a Decay skill and moved to level 14, out of the reach of beta players. Despite being nerfed in Beta Patch 14, it does the same damage in Beta Patch 15 as it did in Patch 13, albeit at a higher mana cost.

The skill was improved during the beta test; given better pathfinding so it didn't get stuck in place by hitting any tiny corner of a wall or other object.

Zombie Charger can be seen in action on video here: