The D3 Team has repeatedly said that they are not going to include a "zoom" feature in Diablo 3. There are two instances when the game will choose to zoom, however, and that would be the player interacting with an NPC which requires dialogue between them, most likely for receiving/accepting quests, and also when the character has their interface open. Beyond this, the player cannot control when the game zooms in.

Characters are visible in close up, and are fully rotatable in the character selection screen, just not in-game.

An ability to zoom in isn't of any real strategic purpose, it's just a way to get a better, close-up look at your character's equipment. This would seem a fun feature in Diablo 3, where the artists are spending so much effort making a huge variety of cool-looking armor and weapons.

Many similar games offer this function, and it's not a big deal, but it can be fun to play with, especially if there's a way to pan the camera around, or turn your character in place so you can see them from a full 360 degree view. However, due to the fact that Diablo III is being constructed like its predecessors in a fixed isometric view, enabling the ability to pan the camera or change the pitch would also require fully re-working the game's art to reflect the ability to do so. The game is designed from the top down to be played in a fixed view.

Various members of the Diablo 3 design and community team have commented on the lack of a zoom feature.

In April 2011, Kaivax explained when the zoom function will operate[1]:

The camera zooms in quite a bit when you do certain things, such as open your armor/inventory window. You go from seeing the entire scene in which your character is standing, to having your character mostly fill the screen.

In April 2010, Bashiok confirmed that there's no planned zoom function: [2]

Bashiok: Still no plans to have a zoom function. There’s a very slight zoom used more as a cue to the player when you enter a conversation with an NPC, but it’s very subtle and doesn’t count for what you’re talking about.

But your character is shown in all its up-close and rotatable glory on the character selection screen. At least currently.

I want to see what my character looks like when he picks up a new armor or weapon immediately in the inventory screen or on the battlefield, and not in the selection screen.
Bashiok: The difference in items is very apparent, you’ll notice your upgrades even from the game camera distance.

Zoom. How much will we be able to zoom in D3 compared to SC2? --kiowa81
There’s no zoom feature planned beyond a slight perspective shift when engaged in conversations. --Diablo

As players saw in the BlizzCon 2009 demo, and as Bashiok commented [5] on when asked about zoom, the "camera" does zoom in during NPC dialogues. This is a very slight zoom, as if the viewpoint lowers from say, 8 down to 7 meters overhead, and it only lasts during observed NPC dialogues.

When the game debuted at the WWI event in June 2008, NPC conversations were portrayed in an extreme zoom and a sideways view in a special pop up window display which you can see below. This approach was abandoned between the June premiere and BlizzCon in October, since the D3 Team felt that it took players out of the flow of the game. 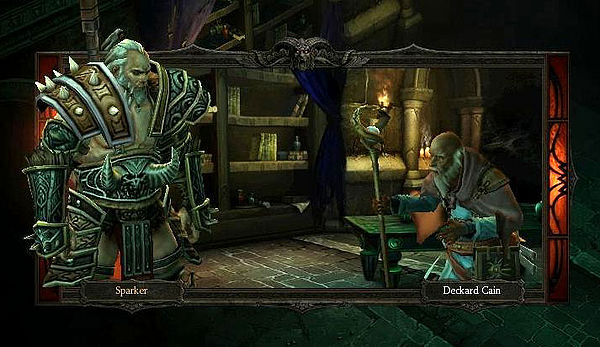