Grasp of the Dead

Grasp of the Dead is a Secondary Witch Doctor skill unlocked at level 2. This skill is a curse; it inflicts victims with much slower foot speed and deals damage as well, and is hugely useful to a low level Witch Doctor, while retaining good value throughout the game and even in high level PvP.

The rune effects offer various increases on the base skill, including higher damage and greater slowing.

Grasp of the Dead in action.

A powerful debuff. This curses the target with much reduced movement speed and deals damage as well. The spell can be cast anywhere in the Witch Doctor's Line of Sight, giving it much more range than most of his spells. As the duration matches the cooldown, it can be kept almost constantly active when recast quickly.

Besides dealing good damage and slowing monsters, it can be used to instantly break all of the destructibles in range

Refer to the Grasp of the Dead rune effects article for thorough descriptions off all five rune effects, including screenshots, videos, and strategy tips. 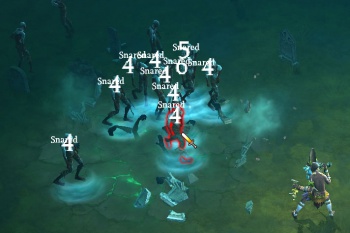 Grasp of the Dead vs. Zombies, from the beta.

This skill is very powerful, even with a fairly small radius. Its slowing effect makes sure that enemies remain in the area of effect for longer, and it can be cast below enemies who are engaged in combat with the Witch Doctor's pets or with other players.

The following Witch Doctor passives provide a benefit to Grasp of the Dead, runed or not:

Grasp of the Dead was first listed in the BlizzCon 2009 gameplay demo at Tier III in the Zombie Skill Tree, but it had not yet been implemented.

This skill was present on the pre-made Witch Doctor in the BlizzCon 2010 Arena as a Tier 3 skill, and was quite effective. Unfortunately, there are no gameplay reports from the event describing this skill.

Skill tiers were removed shortly before the beta started in September 2011, and Grasp of the Dead became a level 3 skill. Flux was able to try it out in the beta:[1]

While testing this one in the beta, I hardly ever tried to cast it a second time when it wasn’t available. Much more often I was surprised to see that it was already cooled-down and ready to use again. Only the fact that you just don’t *need* to use it keeps it from being on nearly every hotkey list. That and the limited hotkeys in the early game; I think this one will be quite popular in the late game, since it provides a very handy defensive aid and deals good damage as well.

Grasp of the Dead was also one of the skills available in the BlizzCon 2011 PvP Arena, and Adivirgi enjoyed using it:[2]

I also used it to slow down enemies who were chasing my injured team mates. It was also useful in tight areas (around the center of the arena map in this demo), where people were forced to run over it to get to you. I think I would have preferred to rune it with a crimson just to add more damage to its DoT effect. Overall this is a fun ability that requires you to be really quick and lead the enemy’s movement so that it lands just in front of where they are running.

The skill system was once again overhauled for the Beta Patch 13 in February 2012, and Grasp of the Dead was classified as a Secondary skill and moved to level 2. For Beta Patch 14, it was nerfed a little bit, and Beta Patch 15 saw its mana cost increase significantly.

Grasp of the Dead can be seen in action on video here: