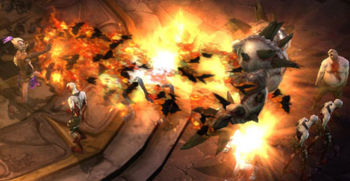 Firebats is a Secondary Witch Doctor skill unlocked at level 5. It casts forth a spray of flaming bats, which deal substantial fire damage to enemies in the vicinity.

Firebats work like an Inferno skill, dealing damage per second to everything in the area of effect. The mana cost is high, and this skill must generally be used in short bursts, rather than as a steady "hose them down" sort of attack.

The Witch Doctor spews fire from his mouth whilst bats fly into the flame, sending forth flaming bats to attack enemies in front of the Doctor.

See the Firebats rune effects article for thorough descriptions of all five rune effects in this skill, including screenshots, videos, patch changes, and strategy tips.

This skill is a sort of Inferno, dealing fire damage to anything in front of the Witch Doctor for as long as he keeps casting the spell. It takes a moment to start producing damage, and requires the Witch Doctor to remain stationary while he casts it.

There is a steady mana drain while the spell is in use.

The following Witch Doctor passives provide a benefit to Firebats, runed or not: 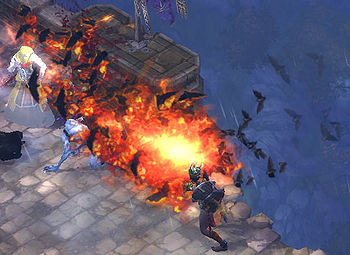 Firebats was first seen in the WWI 2008 build. It was originally located in the Spirit Skill Tree, then moved to the Voodoo Skill Tree, before skill trees were removed entirely.

The skill's damage and range was lowered with the introduction of skill runes; unmodified Firebats were much less effective in the BlizzCon 2010 build than they had been back in 2008. Flux commented on using this skill:[1]

The other interesting thing about this skill was the firing mechanism. You couldn’t click it. If you did nothing would happen. Literally; sometimes one bat would squeak out, but usually not even that. The spell dealt very good DoT, but you had to hold down the mouse button to let the bats flow forth. It took a second or two for the full flow to get going, and once it did the damage was great, but you had to commit to using it.

Skill tiers were removed shortly before the beta started in September 2011, and Firebats became a level 9 skill. Flux used it in the beta, and found it much improved:[2]

In the beta, the base version of Firebats is much better than it was, it starts working more quickly (previously you had to hold down the mouse button for maybe half a second before the bats really started to flow properly), and there’s no longer any rune that simply increases the range and damage of the bats.

There doesn’t seem to be any sweet spot; full damage is dealt to enemies anywhere in the range of the bats, and I mean anywhere; enemies in front do not soak up all the bats and save the back row from getting hit. Every monster in range gets the full damage. The only limitation on this skill is the fairly heavy mana drain. It’s the only Witch Doctor skill in the beta that can drain your mana in normal use, though you need a huge pack or the Skeleton King to fire long enough to run dry.

The skill system was once again overhauled for the Beta Patch 13 in February 2012, and Firebats was classified as a Secondary skill and moved to level 12. For Beta Patch 15, it was dropped to level 5, and was buffed but had its mana cost greatly increased.

Firebats can be seen in action on video here: