Falling back on years of vigorous training, the Monk sweeps his weapon quickly around himself, damaging multiple enemies at a time.

The following is a very quick summary. See the Sweeping Wind rune effects page for a more thorough description of rune effects, or any of the individual rune pages for numbers, screenshots, blue quotes, and much more.

This skill first appeared at BlizzCon 2010. 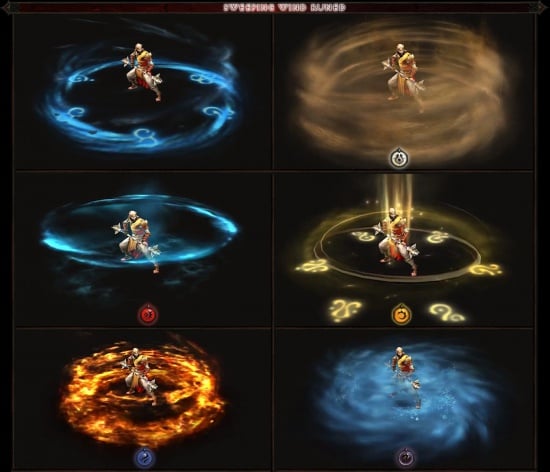 A video of Sweeping Wind and all of its rune effects can be seen below, courtesy of the DiabloInc You Tube channel.

The following Monk passives provide a benefit to Sweeping Wind:

Skill tiers were removed shortly before the beta started in September 2011, and Sweeping Wind became a level 17 skill. The skill system was once again overhauled for the Beta Patch 13 in February 2012, and Sweeping Wind was classified as a Techniques skill and moved to level 22.

For Beta Patch 14, it was moved to level 21. It was also significantly changed in function: previously, it was a Spirit Generating combo skill that struck a single target on every hit, and every third hit created the vortex effect.

Fists of Thunder can be seen in action on video here: