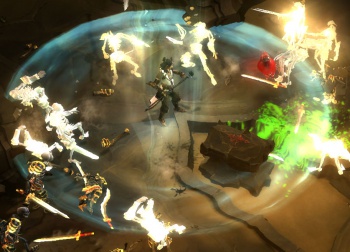 Wave of Force in action.

Wave of Force is a Force Wizard skill unlocked at Level 9, creating a force wave from the Wizard, repelling enemies and projectiles.

This is a very useful offensive and defensive skill for the Wizard, and is also one of the class' most damaging attacks since it can hit so many enemies at once. The lengthy cooldown means it can never be a mainstay of the attack, but it's a great supplement, and also works as a panic button option with the knockback effect.

One special aspect to the skill is that it can push back all incoming projectiles. This not only acts as a defensive help to the Wizard, but actually turns the projectiles into damage against the enemies that fired them. This technique is hard to manage in most situations, but when combined with Slow Time, which can all but stop the incoming projectiles, it's a lot of fun to WoF them all back to where they came from.

The Wizard even has an achievement, A Forceful Rebuke that's awarded for reflecting 8 or more projectiles. This can be achieved very easily with the Desert Wasp green BBs, even without the aid of Slow Time.

Refer to the Wave of Force rune effects article for thorough descriptions of all five rune effects in this skill, including screenshots, videos, strategy tips, and other related information.

This defensive spell casts a nova-like blast of light that deals strong damage and also pushes back enemies and enemy projectiles. It dealt fairly low damage during early development, but that figure was increased over time, and as of the beta then into final release, this skill hits quite hard. 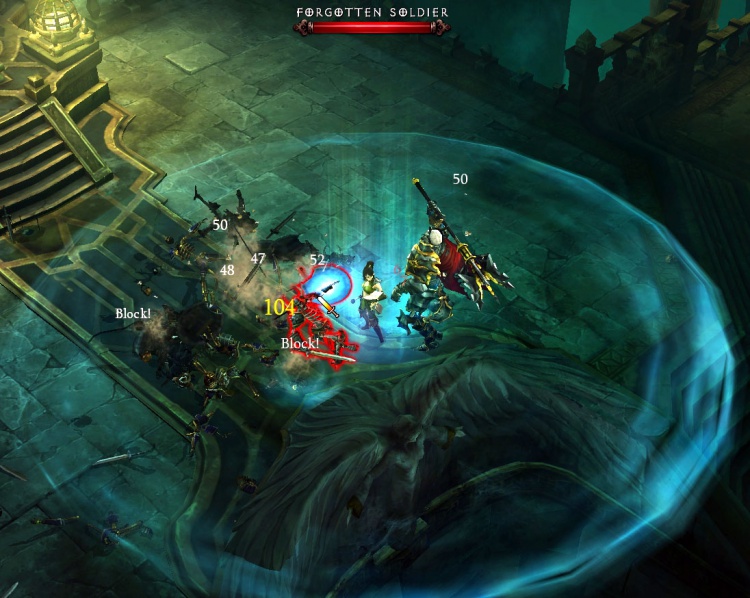 Female Wizard slams skeletons in front of King Leoric in this shot from the beta.

The following Wizard passives provide a benefit to Wave of Force, runed or not: 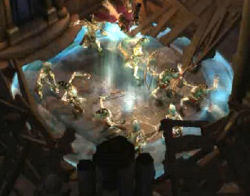 Wave of Force was first shown at BlizzCon 2008 when the Wizard was unveiled, as a Tier II skill on the Arcane Skill Tree. Unfortunately, Flux (and other demo players) found little use for defensive skills:[1]

Sadly, I never used it, since it’s basically a defensive skill that wasn’t needed in the Blizzcon Demo. It’s demonstrated in the Blizzcon gameplay movies though, and looks pretty fun. Wave of Force casts a nova-like ring of energy that blasts out from the Wizard, shoving back enemies and reflecting projectiles towards their source. The possibilities created when teaming this with Slow Time are fun to contemplate.

Skill tiers were removed for the July 2011 Press Event, allowing skills to unlock steadily from levels 1 to 30. Consequently, all skill levels were adjusted and Wave of Force became a level 4 skill.

Wave of Force remained at level 4 when the beta started. Flux thought it fun but still pretty useless in the early game found in the beta:[2]

...it’s purely a support skill in the beta. The long cooldown ensures that, and even if not, the range is fairly limited, compared to your real attack skills like Arcane Orb, Electrocute, and Disintegrate. By the time you get close enough to hit any ranged attacker with Frost Nova or this, your Wizard is getting nailed by all incoming projectiles, not to mention the melee attackers you are running past to get to the back row.

Wave of Force can be seen in action on video here: