The Flagellant is a character class dedicated to purging the sin of man, and purging the world of all evil. He or she does this by whipping himself into a frenzy, fighting enemies in a trance of pain, dealing more damage the more wounds he receives.

The Flagellant is a religious fanatic from the Tristram Brotherhood; believers that are convinced that repentance comes in form of pain and suffering. the Tristram Brotherhood is known to ferociously whip themselves to the tunes of their hymns, deepening the practitioners into a numbening trance. Travelling in grand processions from village to village, with fear following their arrival, as they often take the task of purging the villagers of their sins.

In combat the Flagellant is a fearsome enemy, as he does not flinch even by horrendous amount of damage to himself, and is always dedicated to his cause; cleansing these lands from all evil. He uses methods to numb all senses, mostly by inducing torment and pain to himself before combat, to work himself into a trance where nothing can stop his advance.

The Flagellant is a melee character with a balance between damage output and survivability, complemented with some "holy" spells and buffs to help his cause in the world of Sanctuary. Generally, the Flagellant has two opposing sides that must balance for the Flagellant to work - damage and health. His skills and power often leeches from his health pool, but increases and enhance his damage and powers. The more health tapped, the more dangerous he becomes.

But, with less health comes the danger of dying. It is entirely up to the player to choose which path he would like to take; insane amounts of life but little damage and weak attacks, or vice versa. Thus, the Flagellant is as most dangerous just before he dies. A tactical sense is needed to play in this way, knowing when to use the most of the Flagellant's features in every situation can be a tough undertaking. His skills are divided into three tabs: Flesh, Penance and Iron, which cover offensive attacks, buffs and spells and defensive manoeuvres.

The character receives 1 skill point each level, and some extra in the form of quest rewards. The maximum amount in a single skill differs with caps ar 5, 10 and 20 as a base, but all these can reach above their limit with plus from equipment or other buffs, much like in previous game.

To be able to put points in the next tier of skills, one must have reached the level needed and put at least one point in the skill leading to the desired one, if the arrows indicate a dependence. The tiers get available on lvl 1, 5, 10, 15, 20, 25, and 30 respectively.

The Flagellant skills are arranged into to three distinctive skill tree categories: 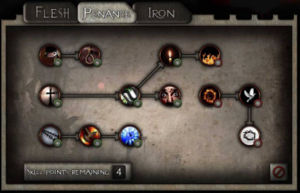 In this tree you'll find the Flagellants offensive abilities, including the Lash, Swirling Whip, and Flog attacks. The option to run a slow heavy-hitting Flagellant or a quick and fast ditto is up to the player, depending on how he chooses to manage the skill points.

Under the penance tab is the passive, buffing and spell skills of the Flagellant. Some of these enhance other skills and work like synergies, other include self-buffs and party buffs. spells aren't the Flagellants main damage output or defence, but a few of them might make it to this tree under the camouflage of being "holy". Mostly, the Penance tree focus on the balance between the Health pool and damage enhancers.

Last but not least, is the defensive skills. These add to the survivability of the Flagellant, with both spell protection spells and different forms of physical damage reductions. A heavy skill point accumulation in this tree will ensure that the Flagellant can take his share of damage, and will make him a resilient fighter.

The Flagellant is a character class created by Vizcire, as an entry in Diii.net's Create a Skill Tree contest, 17 September, 2008. This entry was the first place winner, and earned its creator a ticket to BlizzCon 2008. The class was added to DiabloWiki 11 June 2009 by Flux and Leord.