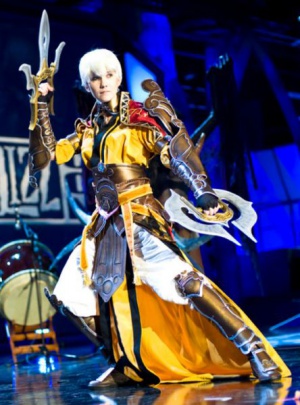 Christina in her winning costume.

Christina Simms (formerly Christina Estrada) is a cosplayer and model who rose to prominence in the Diablo community thanks to the female Monk costume she created for Blizzcon 2010, which won first prize in that year's costume contest.

Christina was subsequently hired to be the first community manage for Hearthstone, a hire based more on her people skills and enthusiasm as a gamer than for her skills as a seamstress.

The news of her win. Video of the final round below.

After winning the prize Christina was profiled by Blizzard and others, for her fashion sense. She also released numerous additional photos of her in the Monk costume.

She was even paid to appear at other conventions, like a professional model.

About the Costume[edit | edit source]

Hello to all my fellow gamers out there! My name is Christina, and I portrayed the Diablo III female monk in the BlizzCon 2010 costume contest. Creating and sharing my costuming works with the BlizzCon crowd is always a highlight of my yearly visit to Anaheim. In previous years, I have also portrayed Mother Shahraz from the Black Temple and a paladin in the tier-6.5 Sunwell Plateau set, with both costumes given the honor of being finalists in the costume contest.

I took what I had learned in years past and applied it to the monk costume, and began the lengthy process of learning about leather crafting. My goals this year were simple: I wanted to be able to sit down in this costume, I wanted it to be as accurate as possible, and I didn’t want the costume to explode after multiple wears. Having only one simple piece of concept art to work off of, I wasn’t expecting it to be as well received as it was. The monk is not wide nor tall, does not glow or have any special effects, and the detailing that was done is hard to see from far away. Lack of grandiosity aside, I worked at the detailing and capturing the look and personality of a strong female warrior and hoped for the best.

Cosplay, to me, is a wonderful hobby that allows you to express yourself and think creatively while showing others how passionate you are about what you are trying to represent. Other cosplayers constantly inspire me to try new things and think in new ways. As long as non-cosplaying people continue to enjoy our efforts and allow us to heighten their BlizzCon experience, cosplayers will continue to delight, scare, and perhaps even inspire others to join us in our creative community.

More photos of Christina in her costume.