Bola Shot (not Bolo Shot) is a Primary Demon Hunter skill unlocked at Level 11. It fires a pair of bombs on a rope that wrap around the target, sticking and dealing explosive damage to the main target and any targets close to it after one second of delay. This skill is not limited to monsters, as the bola can also attach to doors, barrels, and other targetable destructibles.

One handy improvement to this skill during the beta test was the removal of the one-second timer when a destructible was the target. Thus Bolo Shots explode instantly when wrapped around barrels, crates, chairs, statues, etc.

The skill deals light damage upon the initial hit, but packs a considerable explosive charge after a couple of seconds. Multiple Bolas can be wrapped around the same target, yielding repeated explosions in rapid succession. The explosions damage other enemies in the immediate vicinity.

The following is a very quick summary. See the Bola Shot rune effects page for a more thorough description of rune effects, or any of the individual rune pages for numbers, screenshots, blue quotes, and much more.

Bola Shot fires what looks like a blurry Frisbee, spinning in a dark crimson spiral until it reaches its target, leaving a quickly-fading glowing orange trail. It’s actually two bombs on a string, which whirl around and wrap around the neck of a monster. After a short delay, the bola explodes, doing substantial damage to the target, and less damage to nearby monsters.

It's difficult to miss with them, since if they’re aimed anywhere near a target, and any part of the bola touches, the whole thing will stick. Bola Shot also works against larger targets, such as sarcophagi and other destructibles that are too large for the ropes to actually wrap around.

A video of Bola Shot can be seen below, courtesy of the Diablo.IncGamers.com You Tube channel.

The following Demon Hunter passives provide a benefit to Bola Shot, runed or not: 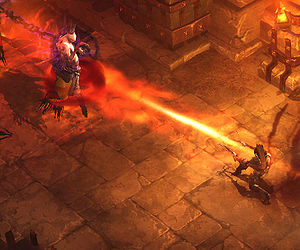 The Bola shot attached to a monster.

Bola Shot was first shown at BlizzCon 2010 when the Demon Hunter debuted. According to Wyatt Cheng from the Gameplay Panel:[1]

It feels really tactical, it has a slight delay that you can use to your advantage in the right situations.

After testing it in the gameplay demo, Flux described using it:[2]

In practice it’s like Explosive Arrow with a time delay fuse; you hit monsters and deal tiny damage with the impact, but then about 1.5 seconds later the bomb goes off and deals substantial fire damage. This skill was fun and effective, but not great to stack on a single target, since you could shoot them 5 or 6 times before the bomb started going off, and usually 2 or 3 would kill anything short of a boss. Thus wasting almost all the damage of your last 3 or 4 shots. I found it most effective to hit monsters with one or two Bolas, and then move on to shoot something else, trusting them to die when the time delay ran out.

Skill tiers were removed shortly before the beta started in September 2011, and Bola Shot became a level 5 skill, but was soon changed to level 4. The skill system was once again overhauled for the Beta Patch 13, and Bola Shot was classified as a Primary skill and moved to level 3. For Beta Patch 14, it was bumped up to level 11.

Bola Shot can be seen in action on video here: