Were you looking for the Scoundrel skill Multishot? 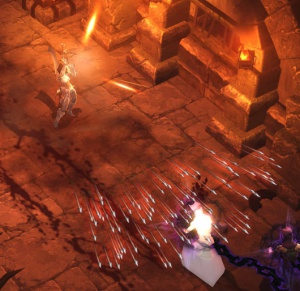 Multishot is an Archery Demon Hunter skill unlocked at Level 22. The Demon Hunter shoots a massive fan of arrows or bolts that hit every enemy in that direction for substantial damage.

Multishot is very useful for hitting large groups of enemies, as every single monster in that direction will be hit (but just once). The arrows will even hit monsters on the other side of dungeon walls (but not over Waller walls), making this very useful in dungeons with a lot of small rooms, such as the Keep in Act Three. The arrows travel very quickly, moving through everything and vanishing in just a blink; much faster than most other projectile arrow attacks, such as Ball Lightning or Cluster Arrow.

The downside to Multishot fairly limited range (monsters at the top of the screen are out of range) and a high Hatred cost.

The half-price Fire at Will rune effect is the most popular version of Multishot, and most players also use Bat Companion and/or the Vengeance passive to keep their Hatred up enough to constantly fire Multishot.

See the Multishot rune effects page for a more thorough description of rune effects, or any of the individual rune pages for numbers, screenshots, blue quotes, and much more.

Multishot is a carry-over skill from the Amazon in Diablo II, and it functions in the same way albeit in a slightly more exaggerated form with literally hundreds of arrows that guarantee any monster in that direction will be hit. The spread of the projectiles can not be controlled, but it's important to aim it properly to hit as many enemies as possible.

The following Demon Hunter passives provide a benefit to Multishot, runed or not:

Also, if using the Arsenal rune on Multishot, then the Passive skill Ballistics will boost the rockets' damage by 50% 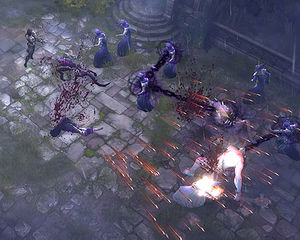 This skill was first shown at BlizzCon 2010 as one of the originals when the Demon Hunter was unveiled. At that point it was a low damage utility sort of skill. Flux described using it in the demo:[1]

It looks awesome; you get a fantastic burst of arrows that look very impressive. Try counting them in one of the screenshots; I did a very quick scan across one shot and got to well over 100. That was at Rank 1/5 in the demo, so possibly it will produce less in the final game, but I don’t think so. It’s meant to be something of a shock and awe attack, at least visually.

Skill tiers were removed shortly before the beta started in September 2011, and Multishot became a level 21 skill, but was soon changed to level 17. The skill system was once again overhauled for the Beta Patch 13, and Multishot was classified as a Devices skill and moved up to level 22. For Beta Patch 14, it was re-classified as an Archery skill (but stayed at level 22).

Multishot is an updated and exaggerated version of Diablo II's Amazon skill Multishot.

Multishot can be seen in action on video here: