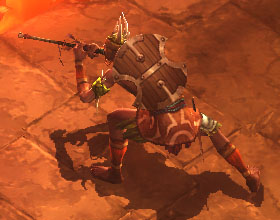 Poison Dart is a Primary Witch Doctor skill unlocked at level 1. It's a ranged attack in which the Witch Doctor blows a poisoned dart at the enemy, dealing initial poison damage and additional damage over time.

The dart moves very quickly and has full screen range, making this a very accurate attack with longer reach than almost any other Witch Doctor skill.

The Witch Doctor uses a blowpipe to fire a poison dart. Rune effects can fire multiple darts, or add special functions to the dart. With its low mana cost and great utility, this is one of the more popular Witch Doctor skills.

Refer to the Poison Dart rune effects page for thorough descriptions of all five rune effects in this skill, including screenshots, videos, and strategy tips.

This low-level direct damage skill first appeared in 2010. The casting animation is fairly slow, but the projectile itself is very fast and accurate. The dart always hits the first enemy it encounters though, making this skill difficult to hit anything beyond the first row of enemies.

The following Witch Doctor passives provide a benefit to Poison Dart, runed or not:

Poison Dart was revealed as a Witch Doctor skill in early August, 2010. A fan in the official forums proposed a dart gun weapon for the Witch Doctor, and got more than he bargained for in the reply:[1]

It was first seen in Blizzcon 2010 and skill runes were also shown at this moment. It was one of the Witch Doctor's starting skills, and Flux obligingly wrote about it:[1]

The main attack skill that the WD started with, this one was also disappointing while un-runed. It’s pretty much what you’d think; a tiny green projectile that deals impact damage and some DoT to the target. The dart moves quickly through the air so it’s got good accuracy, but the casting (blowing) animation is very slow. Lift the pipe, squat down into the shooting stance, fire, stand back up again, repeat. This results in a poor DPS, even though the actual dart isn’t terrible.

Skill tiers were removed shortly before the beta started in September 2011, and Poison Dart became a level 1 skill. Flux tried it out again, and reported on it:[2]

Poison Dart is the Witch Doctor’s starting attack skill, and the unruned form is about as straight forward as a skill can be. Literally! The Witch Doctor whips out a blow pipe and spits one dart in a straight line, which deals poison damage on impact with some additional poison drain over time. Though the firing animation is kind of slow, the dart flies quickly, and I had no trouble hitting even moving targets. (There are very few monsters in the beta that do anything other than advance upon you in a straight line at a predictable speed.)

The skill system was once again overhauled for the Beta Patch 13 in February 2012, and Poison Dart was classified as a Primary skill (but remained at level 1). After being nerfed some for Beta Patch 14, it was nerfed just a little bit more for Beta Patch 15.

Poison Dart can be seen in action on video here: