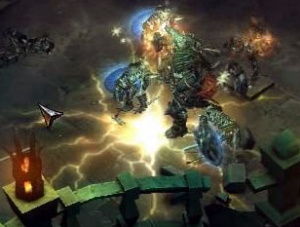 These boots are heavier than they look...

Ground Stomp is a Defensive Barbarian skill unlocked at level 4, which stuns enemies around the Barbarian for a limited period of time.

The Barbarian stomps the ground with such fury, that enemies around him are left bedazzled and cannot move.

The following is a very quick summary. See the Ground Stomp rune effects page for a more thorough description of rune effects, or any of the individual rune pages for numbers, screenshots, blue quotes, and much more.

Ground Stomp is a useful skill, it will buy the Barbarian precious time should the need arise. However, it is unknown if it will work on bosses.

On regular enemies, stars can be seen circling around the heads of stunned monsters.

The skill has unique properties as well, Skeletal Shieldmen for example, have a shield that blocks most if not all damage, but a well placed Ground Stomp will cause them to drop their shields, making these skeletons easy pickings.

This skill has an impressive and very powerful graphic. The earth trembles when the Barbarian stomps, and glowing yellow lines radiate out from the impact point, like pavement cracking under the weight of a dropped safe.

A video of Ground Stomp in use can be seen below, courtesy of the DiabloInc You Tube channel.

The following Barbarian passives provide a benefit to Ground Stomp, runed or not:

Ground Stomp was first introduced in the WWI 2008 gameplay video, as a Tier III skill in the Juggernaut Skill Tree. The original Ground Stomp gave enemies a slight knockback and had a very short cooldown. In June 2009 Bashiok said it was to cost no Fury reserves but would be subject to a much longer cooldown.[1]

Ground stomp is an exception mainly because of the nature of its use. A cooldown allows it to be used as an “oh crap I’m overwhelmed” ability without also requiring you to have fury built up.

At BlizzCon 2009, Ground Stomp was shown with the longer cooldown, no knockback, and moved to Tier II. Flux discovered another use for it:[2]

The radius of attack is very limited, just a few meters, so while this one worked to knock Dune Dervishes out of their invulnerable (to melee attacks) Whirlwind mode, you had to get quite close to use it, and time it just right.

In the BlizzCon 2010 gameplay demo, Flux was able to try it out with a rune that added knockback:[3]

I can imagine high level Barbs having fun with GS and knockback. If you had gear to lengthen the duration of the stun, it might be fun to torture monsters, banging them around like shuffleboards and trying to push them in various directions. You’d need high hit point enemies though, so you didn’t prematurely kill them during the maneuvers.

Skill tiers were removed for the July 2011 Press Event, allowing skills to unlock steadily from levels 1 to 30. Consequently, all skill levels were adjusted and Ground Stomp became a level 1 skill.

Ground Stomp was bumped to level 8 for the beta. With the Patch 13 changes, it was classified as a Defensive skill (but stayed at level 8). For the Beta Patch 14, it was dropped to level 4.

Ground Stomp is similar to Diablo II's Barbarian skill War Cry, which does damage to monsters, in addition to stunning them.

The name and mechanic of this skill is possibly directly inspired by the Tauren Chieftain hero in WarCraft 3. The Tauren racial in World of WarCraft called "War Stomp" is also very similar.

Ground Stomp can be seen in action on video here: