The Juggernaut skill tree is a Barbarian skill tree themed with the Barbarian's powers in combat, and has skills to reflect this. 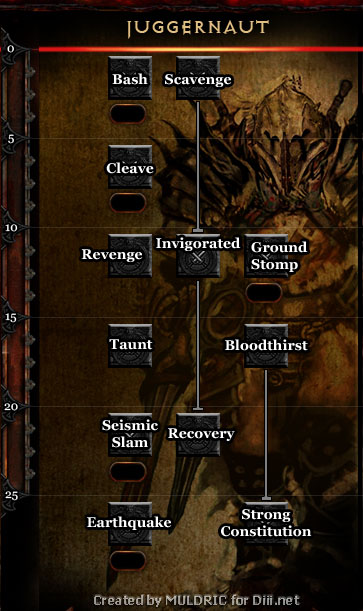 Juggernaut Skill tree as of BlizzCon 2009.

The Juggernaut tree focuses on creating barbarians whose main role in battle is to take damage, to tank to some extent and to be a support to his allies. As such, the tree has skills that the Barbarian can use to heal him self quicker than barbarians of other builds, to force enemies to attack him and to make them powerless once they are in his clutches. Also, like any skill tree focusing on any element of gameplay, it cannot be called a skill tree if it doesn't have signature skills that can actually kill. Luckily for us, the Juggernaut tree has a few cool skills that makes enemies easy to kill, like Bash, Cleave and Seismic Slam.