Mirror Image is a Mastery Wizard skill unlocked at Level 25, creating an illusionary duplicate of the Wizard.

The duplicates have hit points and move around just like the Wizard, casting from the same available skills and creating a useful distraction for the enemies. Their attacks do not deal any damage though, and they are purely tanks/distractions, not offensive weapons. 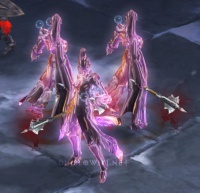 In order to avoid close combat as much as possible, the Wizard can create duplicates of herself, who will also aggressively attack opponents.

Refer to the Mirror Image rune effects article for thorough descriptions of all five rune effects in this skill, including screenshots, videos, strategy tips, and other related information.

This skill creates a duplicate of the Wizard that uses Wizard spells to ferociously attack monsters the instant it appears. The Image's spells don't do any damage, so it's more like an animated Decoy than a Shadow Master. But it works like a tank, with monsters attacking the Image if it is closer to them than the Wizard, and as anyone who has played artillery characters knows, a tanking minion (or another player) is beyond value.

Lesser known effects of Mirror Images is that it sheds almost all debuffs, and breaks almost all forms of CC adding to its uses.

The following Wizard passives provide a benefit to Mirror Image, runed or not:

Mirror Image was first shown at BlizzCon 2008 when the Wizard was unveiled, where it was at Tier II on the Conjuring Skill Tree. It then spawned five illusion images.

The BlizzCon 2009 version increased illusion health; it seemed likely the number of images probably could be increased through the use of skill runes. Flux found it useful in the right circumstances:[1]

I didn’t use this one very often during play, since the Wizard was powerful enough to slaughter most attackers without needing the assistance, but the few times I did Mirror Image, against big mobs, it worked marvelously. The mirror doesn’t last for very long, usually dying to the monster onslaught, but it didn’t have to. The Wizard has a number of nice AoE spells, even at low levels, and all the MI had to do was provide a focal point for the Fallen or Dark Cultists to swarm around to turn them into fish in a barrel for Arcane Orbs.

Mirror Image was still listed at BlizzCon 2010, but it wasn't one of the Wizard's starting skills. Skill tiers were removed for the July 2011 Press Event, allowing skills to unlock steadily from levels 1 to 30. Consequently, all skill levels were adjusted and Mirror Image became a level 15 skill.

The skill changed visuals at some point late in development where instead of "normal" clones of the Wizard, the Wizard herself and the images took on a metallic sheen, which added visibility in the playing field.

Mirror Image was dropped to level 14 early in the beta. With the Patch 13 changes, it was classified as a Mastery skill and bumped to level 25.

Mirror Image is basically a combination of the Assassin skill Shadow Master and the Amazon skill Decoy from Diablo II. The Mirror Image attacks monsters with a variety of skills, like the Shadow Master, but doesn't do any actual damage, like the Decoy.

Although PVP and Arena play has yet to be released for Diablo III, there are still some things to take into consideration. For Mirror Image, despite whether it is or is not runed, the Collector's Edition wings create a bit of an issue. 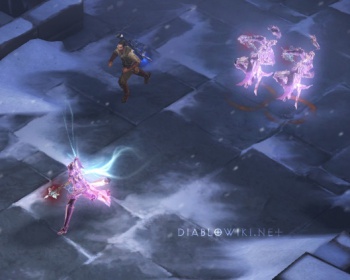 As seen in the image, only the actual Wizard displays the CE Wings, which are a vanity item from the Collector's Edition, giving away which Wizard is the player.

Mirror Image can be seen in action on video here:

Skill runes made both skills obsolete.