Bash is a Primary Barbarian skill available at Level 1, which hits targeted enemies for extra damage and causes knockback.

The base skill and three of the rune effects were buffed in the v1.0.4 patch, in an attempt to make Bash a better alternative to the very popular Frenzy.[1] Many players felt these improvements did not go far enough, and continued to use Frenzy or the upgraded Cleave.

These stats come directly from Blizzard so they are always the latest stats. 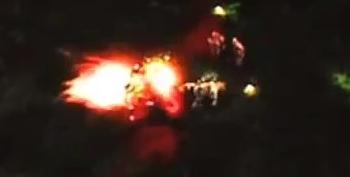 This notorious Combat skill makes a return in Diablo 3, having the same basic functions as it did in Diablo II. However, this new version is not identical, hitting for 200% weapon damage at rank 1, making the skill a powerful single-target ability that will presumably scale well at higher levels.

Even though Bash scales with weapon damage, the Barbarian chooses a more simple weapon when executing the skill... his bare fist. The Barbarian rears back, winding up for the punch, and delivers a devastating blow to the target. Spamming Bash has become difficult, due to the Fury cost and the relatively long cast time (~1s).

Since spamming Bash has become hindersome, it can be safely assumed that this skill will no longer cause "Bash-locks", where a player repeatedly spams Bash, causing the enemy to be unable to retaliate. However, the knockback effect of this skill might help the player in other ways, for example, to stop the Cultist from becoming a big-ass demon, forcing him to restart the ritual/incantation (assumed).

The following Barbarian passives provide a benefit to Bash, runed or not:

Bash was first seen at BlizzCon 2008, where it could be found at Tier I on the Juggernaut Skill Tree. Back then, it didn't use knockback at all, it only made the Barbarian dash forward, and hit with full weapon damage.

By BlizzCon 2009, knockback had been added, but otherwise the skill was pretty much the same. Flux had the opportunity to try it:[2]

It works much as it did in D2, but the animation is so cool that it’s a blast to use. When using Bash, the Barbarian positively winds up, twisting his upper body and leaning completely over, away from the monster, before uncoiling and extended into the strike like he’s driving a railroad spike. It’s quite an, “OMG he knocked the sauce out of that dude!” visual, and better yet, sometimes when you kill a monster with this, you literally knock their skeleton out of their flesh, sending the fully-articulated, blood-stained bones sliding across the screen, shuffleboard style, a drenching trail of blood in their wake. I laughed like a school girl every time it worked.

Anyone would. For the BlizzCon 2010 demo, Bash was available for play, but was not one of the Barbarian's starting skills.

Skill tiers were removed for the July 2011 Press Event, allowing the skills to unlock steadily from levels 1 to 30. Consequently, all skill levels were adjusted and Bash became a level 1 skill.

Bash itself didn't change much during the beta, aside from some tweaks to damage output. With the Patch 13 changes, Bash was classified as a Primary skill (but stayed at level 1).

This skill is an updated version of Diablo II's Barbarian skill Bash. That skill used knockback and was frequently used to "bash-lock" enemies in PvP.

Bash can be seen in action on video here: