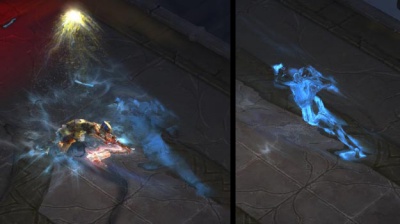 The Flying Side Kick rune effect.

Dashing Strike is a Techniques Monk skill unlocked at Level 9. The Monk dashes forwards to attack his enemy, appearing behind them and inflicting a short confused debuff on the target.

This skill allows almost instantaneous movement to the target, but it is not a teleport. It can not be used to bypass gaps or move over walls (such as from the Waller boss modifier). Interestingly, while Dashing Strike does not break the Jailer effect, the Monk will still move to the target; he'll just take the orange jailer circle with him.

Dashing Strike can be used to avoid some effects, since the Monk is untouchable by spells and monsters during the dash. A monk can pass through Arcane Enchanted beams or over Plagued or Desecrator pits without taking damage, and can even avoid being hit by the Frozen explosion with a perfectly-timed Dashing Strike.

The Monk dashes forward to strike his enemy, dealing physical damage. This is a helpful movement skill, taking the Monk instantly to the targeted enemy. It befits his class build as a party leader and tank, with very fast hit and run abilities.

Though it provides movement, Dashing Strike is not precisely a movement skill. It only works when an enemy is targeted; the Monk can cast it on an empty screen, but will only move a few yards without a target. Destructibles can be targeted as well as monsters, and this is an effective way to move quickly and break multiple barrels or other such objects upon arrival.

There are some pathfinding bugs when using Dashing Strike against targets on the other side of obstacles that can not be crossed directly, such as the gaps in the ground in the Act One Cemetery of the Forsaken. The Monk will target an enemy on the other side of the gap, but will then dash around the gap as though walking, and will stop and hit at the air before reaching the enemy.

The following Monk passives provide a benefit to Dashing Strike:

Dashing Strike was first revealed at BlizzCon 2010 as a Tier 4 skill, but was untestable in that demo.

Skill tiers were removed shortly before the beta started in September 2011, and Dashing Strike became a level 6 skill. The skill system was once again overhauled for the Beta Patch 13 in February 2012, and Dashing Strike was classified as a Secondary skill and moved to level 2. For Beta Patch 14, it was re-classified as a Techniques skill and moved to level 9, and also buffed a bit.

Testers found it a very nice skill during beta testing, as it let the Monk move so quickly between groups of overmatched enemies.

Dashing Strike can be seen in action on video here: