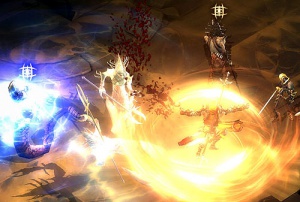 Crippling Wave is a Primary Monk skill unlocked at Level 11. The Monk performs a sweeping attack on all nearby enemies. Every third hit reduces their movement and attack speed.

As Monks are relatively frail without heavy armour or shields, they have developed techniques to hit enemies where it hurts the most, slowing them down, and making their attacks less successful.

The following is a very quick summary. See the Crippling Wave rune effects page for a more thorough description of rune effects, or any of the individual rune pages for numbers, screenshots, blue quotes, and much more.

A video of Crippling Wave can be seen below, courtesy of the Diablo.IncGamers.com You Tube channel.

The following Monk passives provide a benefit to Crippling Wave, runed or not:

Crippling Wave was first shown at BlizzCon 2009 as one of the original skills when the Monk was unveiled. Flux was able to try it out:[1]

This one seems like it would be very useful against big bosses, since it makes them susceptible to damage, while making them deal less to you. Throwing in stage 2 or 3 of this in the midst of other more useful combo attacks could be helpful, now and then, since the curse-like debuff can hit multiple enemies in close proximity.

Crippling Wave was still in the game at BlizzCon 2010, but there are no gameplay reports from that event discussing this skill.

See the Monk skill archive for more details on previous versions of Crippling Wave and other Monk skills.

Crippling Wave can be seen in action on video here: