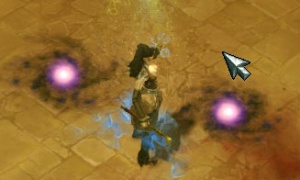 This rune effect changes the spell greatly, creating four orbiting orbs. These circle protectively around the Wizard, each of them capable of bursting for the full attack spell damage when a monster comes into contact with them.

This is actually the highest damage form of the skill, with 4 orbs for the resource cost of one. The danger, of course, is that a monster must be at point blank range to be hit by them. The splash is much reduced as well, but a bold Wizard could stand just out of reach, landing all four in succession on a melee range enemy.

Refer to the Arcane Orb rune effects article for thorough descriptions of all five rune effects in this skill, including screenshots, videos, strategy tips, and other related information.

Two shots taken in zoom mode, showing the starting form with four orbs, and three orbs, after one has burst against an enemy. Note that their spacing is redistributed so the three orbs are evenly-spaced, rather than leaving a larger gap where one orb burst.

Prior to the skill revision in February 2012, this rune effect was enabled by the Obsidian Rune, granting the following effect with a level 7 runestone: