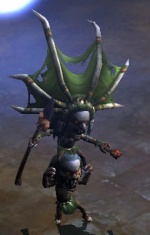 Hex is a Defensive Witch Doctor skill unlocked at level 22. It summons a Fetish shaman to assist the Witch Doctor by hexing enemies into chickens for a limited duration. The Witch Doctor will only Hex one enemy during the duration of the effect, and may not hex anything at all if there are no hexable enemies in sight when the Shaman is first summoned.

Chickens are motionless and helpless, and can be attacked with impunity for the duration of the effect, so this is basically a very powerful debuff to a single target. Champions and Elites can be Hexed, the largest quest bosses and Act Bosses are immune. The hit box changes along with the chicken form, so larger enemies may become harder to hit when poultried; for instance, attacks such as Plague of Toads will only hit with one toad, instead of two or three as they would against larger enemies.

Other players can be Hexed in PvP, making this a very powerful skill in the Arena.

The Witch Doctor summons a Fetish spellcaster to cast hexes upon his enemies. Hexed enemies are turned into chickens for a short duration, which can be attacked more easily than regular monsters.

Refer to the Hex rune effects article for thorough descriptions of all five of rune effects in this skill, including screenshots, videos, and strategy tips.

Descriptions of this skill viewable at Blizzcon 2009 and Blizzcon 2010 gave only vague information about its function, but an August 2011 gameplay video ([1]) shows it in use. A Witch Doctor is seen to use the skill several times in rapid succession, summoning a Fetish Shaman with each use. Each Shaman remains stationary and bathes the ground in a broad area around itself with pulsing, green light. As soon as one such Shaman is summoned, a wraith within its field is seen to spontaneously transform into a clucking, white chicken and wander aimlessly for several seconds, before spontaneously reverting to its original form. Several skeletons within the same Shaman's AoE remain unaffected.

The following Witch Doctor passives provide a benefit to Hex, runed or not: 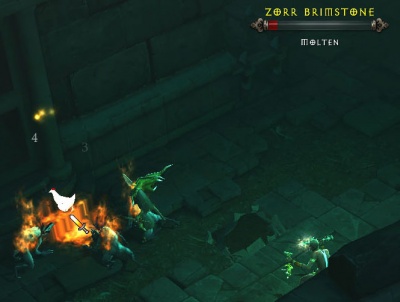 Hex was first seen at BlizzCon 2009 listed as a skill in the gameplay demo, but it was not yet implemented. At the time, it was a Tier II skill on the Voodoo Skill Tree. It was still listed at BlizzCon 2010, but there are no gameplay reports detailing any use of the skill at the event.

Skill tiers were removed shortly before the beta started in September 2011, and Hex became a level 6 skill. Flux was able to finally try it, and found it very fun but difficult to use effectively:[2]

Thus Hex is just for special occasions. For bosses, basically, and it’s quite useful there, since it instantly neuters their entire offensive suite. The chicken just stands there, with the hover tag still showing the boss’ name, and it’s funny. FUNNY! The effect doesn’t last that long, and with most bosses they turned back into their normal selves before I could kill them in chicken form, but it gave me free hits with bonus damage for some time.

Hex was one of the skills available in the BlizzCon 2011 PvP Arena, and Adivirgi also enjoyed using it:[3]

I kept forgetting to use this ability but it is incredibly powerful and made it a lot easier to take down barbarians who were leaping at me or pulling me towards them. It was most useful to cast it just as an enemy appeared, but casting it a little bit before gave you more time to focus on using attack skills, since the fetish guy followed you around for 8 seconds.

Hex can be seen in action on video here: