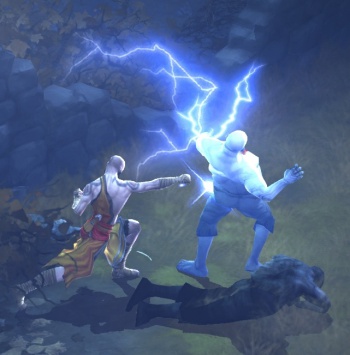 Fists of Thunder in action, with Lightning damage.

Fists of Thunder (known as Hands of Lightning prior to July 2011) is a Primary Monk skill unlocked at Level 1. The Monk charges his strikes with lightning. Every third strike adds knockback.

A Monk vs. the Undead.

The following Monk passives provide a benefit to Fists of Thunder, runed or not:

Fists of Thunder was first shown at BlizzCon 2010, then named Hands of Lightning. Blascid reported on using the skill at BlizzCon:[1]

In the Monks case, with her actual lightning fist skill (I do not remember the name), the first hit would be a claw sweep with lightning damage, the second one granted more lightning damage with more lightning graphics, and the third hit was a lightning blast that created a nice AOE arc. (The third move’s animation {Monk’s move and spell effect} reminded me of how Ryu and Ken’s Hadouken looked in Street Fighter 2 {Sorry, I have not played any more recent than that} if your opponent was right in front of you.)

Flux also wrote about using this skill at BlizzCon. A small excerpt:[2]

Before the July 2011 Press Event (when skill tiers were removed), Hands of Lightning was renamed Fists of Thunder.

See Hands of Lightning for the original version of this skill.

The three hits of Hands of Lightning, with the big blast on the final hit (from 2010). 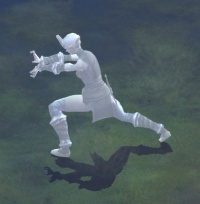 Did somebody mention Street Fighter?

Fists of Thunder can be seen in action on video here: