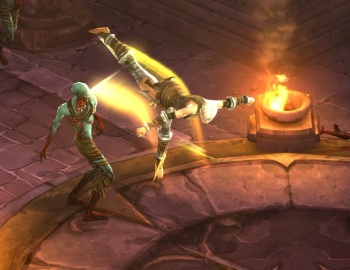 Spin-kicking a Zombie in the head.

Lashing Tail Kick is a Secondary Monk skill unlocked at Level 2. The Monk performs a flipping, spinning roundhouse kick that adds damage and knocks back enemies.

The Monk expends spirit energy to deliver a roundhouse kick to his target, knocking them back and dealing damage.

The following is a very quick summary. See the Lashing Tail Kick rune effects page for a more thorough description of rune effects, or any of the individual rune pages for numbers, screenshots, blue quotes, and much more. 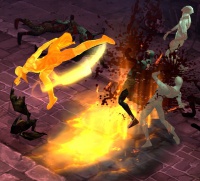 This skill first appeared at BlizzCon 2010. There are currently no visuals available for the skill, and no reports on it from demo players. It was revealed in the skill tree.

The following Monk passives provide a benefit to Lashing Tail Kick, runed or not:

Lashing Tail Kick was first revealed at BlizzCon 2010, but there are no gameplay reports describing this skill. 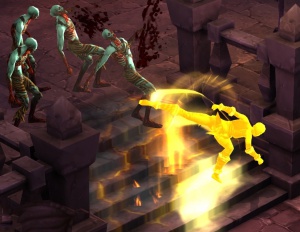