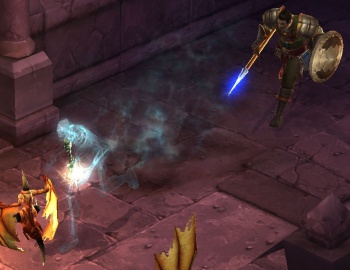 Spirit Walk is a Defensive Witch Doctor skill unlocked at level 16. It's a very useful escape/movement skill, one which lets the Witch Doctor move without being seen or damaged by other players or monsters for several seconds. This can be used to bypass dangerous monsters, and it's essential in the Battle Arena.

This is the Witch Doctor's movement ability.

A Witch Doctor can use Spirit Walk even without activating it, simply by using the Spirit Vessel passive skill. That skill's effect kicks in when the Witch Doctor takes fatal damage, shifting him into Spirit Walk form for 3 seconds and providing 10% healing. This effect has a 90 second cooldown, so it's very helpful, but not a panacea for hardcore characters.

The Witch Doctor enters the spirit realm through a trance, and can move unseen and untouched, passing through enemies, but still grabbing health orbs while he's there.

Refer to the Spirit Walk rune effects article for thorough descriptions of all five rune effects in this skill, including screenshots, videos, and strategy tips.

The Witch Doctor vanishes from the sight of all, leaving an empty husk of a body behind, floating in the air as a decoy. While in the spirit realm the Witch Doctor can run without being hindered by other characters or monsters, moving to a safe place before the duration wears off and he reenters the corporeal world.

The following Witch Doctor passives provide a benefit to Spirit Walk, runed or not: Spirit Walk decoy left behind in the Battle Arena.

Spirit Walk was first seen as a Witch Doctor skill at BlizzCon 2009, as a Tier V skill in the Spirit Skill Tree. However, it wasn't yet implemented.

This was one of the skills on the pre-made characters in the PvP Arena demo at BlizzCon 2010, and soon proved itself as one of the best skills in the entire demo. It was the best escape skill possessed by any of the characters. Flux wrote about using it in a lengthy hands-on PvP report:[1]

I’ve raved about this one already, but it was really an awesomely useful skill. The Witch Doctor leaves a decoy of himself behind and has several seconds to run free, invisible to everyone. Best of all he can grab health orbs in this mode. He can’t cast other spells though, so no detonating Sacrifices. Almost everyone used this to run to safety, and then recast their three Mongrels in some distant corner before returning to the battle.

Skill tiers were removed shortly before the beta started in September 2011, and Spirit Walk became a level 12 skill. Flux was able to try it out again, but didn't think it had much utility outside of the Arena:[2]

Another skill that no one has used on purpose in the Diablo 3 Beta, Spirit Walk is the Witch Doctor’s escape movement skill. When cast, the Witch Doctor takes on a transparent, skeletal, ghostly appearance that is invisible to enemies. Like the base effect of Horrify, this is a very quick reflexes skill, with just 3 seconds of invisibility granted. The skill description doesn’t make it clear, but you get a substantial speed boost in this form, and you can put quite a bit of distance between yourself and the spot you cast the spell at.

Fortunately, Spirit Walk was one of the skills available to Witch Doctors in the BlizzCon 2011 PvP Arena demo, and Adivirgi swore by it:[3]

This skill is so amazing, by far my favorite Witch Doctor ability, and I can’t see any PVP build without this skill and rune combination. Anytime I ran into trouble I would pop this ability and run with increased speed away from my enemy towards a health globe... I found that by using this ability I was able to keep myself alive much longer than most of my teammates.

The skill system was once again overhauled for the Beta Patch 13 in February 2012, and Spirit Walk was classified as a Defensive skill and moved to level 16, out of the reach of beta players.

Spirit Walk can be seen in action on video here: