Trial of Cinders is a rune effect in Vault, a Discipline-spending escape/movement Demon Hunter skill.

This rune effect leaves a trail of fire behind when the Demon Hunter vaults, burning enemies that pass through it for 300% of weapon damage. This skill is meant as a bonus damage effect, useful to hurt pursuing enemies. It can be used as a major attack, at least on lower Monster Power settings, but the high Discipline cost is meant to limit its use to a support ability.

This rune initially dealt only 100% weapon damage as fire and was generally useless at that point. In Patch 1.0.4 the skill was buffed considerably, with a target of 300% weapon damage. There was a bug in the patch though, which caused the flames to actually deal 1500% damage. Demon Hunter players found this deliciously overpowered, and there was much argument[1] (quoted below) when Blizzard decreed the 1500% a bug and fixed it in Patch 1.0.5.

See the Vault rune effects page for a more thorough description of all five rune effects in this skill, including screenshots, videos, and strategy tips. 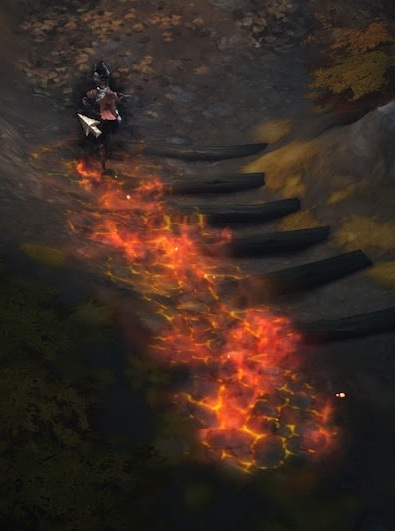 Trail of Cinders down a forest path.

The Vault skill moves very quickly, and this rune effect just adds a trail of flames in the straight line covered by the Demon Hunter. The flames take a half second or so to start burning up from the ground, after the Vault is completed.

A video showing the skill in action during v1.04 when it was briefly overpowered.

Patch v1.04 greatly improved this skill to 1500% weapon damage. Blizzard soon decreed that to be a bug and said the skill was actually only supposed to do 300% weapon damage over 3 seconds, and that it would be fixed in the next patch. This was not a popular decision with Demon Hunter players who saw only a huge nerf to a skill they'd just learned to appreciate, and much argument ensued.

Blizzard representatives did a great deal of explaining on this issue in early September 2012, and the conversation can be seen below.[2]

In patch 1.0.5, we will be fixing a bug with Trail of Cinders that is causing the rune to deal five times more damage than intended. As a result of this fix, the amount of damage done by Trail of Cinders will be reduced from its current value (1500% weapon damage over 3 seconds) to 300% weapon damage over 3 seconds. While this bug was discovered very quickly after 1.0.4 released and is capable of being hotfixed, we didn’t want to move forward with the fix without giving players proper notice. We also know that players are having fun using Trail of Cinders in their builds, so — although this is an important issue we want to address — we’re opting to wait for the next client patch to make any adjustments.

We recognize that some builds which currently use Trail of Cinders will no longer be viable once this bug is fixed. Ultimately, we want to continue to provide players with more build options and ways to feel creative with their skill/gear selections, but not at the expense of going against our design goals or creating situations which can encourage players to limit themselves defensively.

Discipline-based skills were never intended to trump Hatred-based skills when it comes to dealing damage. Instead, Discipline should be something you build up and save to use defensively, or to provide utility in addition to dealing damage. Allowing Trail of Cinders to remain in its current form goes against this philosophy, and in addition creates risky scenarios for players (after all, if you’re incentivized to spend all your Discipline doing damage, it won’t be available when you need it to keep yourself alive with skills like Smoke Screen or Shadow Power).

Agree not a bug a bug is something that is doing something not as intended. It is dealing 1500% damage it is working as it was designed.
The fire on the ground deals damage 5 times a second, and we set a value for how much damage we wanted Trail of Cinders to do in that period of time. Unfortunately, that value was incorrectly added to the individual ticks. So, the amount of damage currently done by each of those 5 ticks is actually the total amount of damage it’s supposed to do over the entire second. That part is a bug.

We didn’t catch this during testing, which is absolutely our fault. There are still very good reasons for fixing this issue, and they’re outlined in the main post.

I know its early days for this game, but I hope that you will allow for some evolution in the characters you guys have made. I mean, why not allow for a switch in playstyle for those that choose it. Since the patch, I have been using TOC as an offensive and putting my char in danger as a result, but its way more fun than keeping my distance.

Please don’t set all your ideas in stone yet, there may be much better way to go about it… or at least give us the freedom to choose.


This is definitely feedback I will be relaying back to the developers. Thank you for sharing it. :)

whoa, whoa, whoa! you mean the patch notes you released were a lie?

this clearly states 1500%. that means if you didnt intend for it to be 1500% then it was completely untested AND no one checked the patch notes either. Do you have no quality control division? no testers? why the heck are you lieing to us?
The note was written based on incorrect information, yes (which due to the fact that we missed this issue during testing). We’ve already identified why we missed this issue originally and have improved our processes so that the same issue won’t happen again — both for in terms of testing changes and confirming information put into the patch notes.

Is it a bug that the toottip says 1500% as well?
The tooltip pulls from the actual game data. Since the rune is currently dealing 1500% weapon damage, the tooltip value reflects this.

There are still tooltips in game now that don’t accurately reflect the skill they are describing. So, your theory doesn’t work. And blizzard has said that there will be safeguards before. But they continue to fail with this beta product. And on top of that they pretty much tell us we’re all stupid by proclaiming it to be a bug instead of having a bit of integrity and telling the truth.
It actually depends on how the tooltip is set up, and from where its pulling its data. In the case of Trail of Cinders, the tooltip is displaying 1500% weapon damage over 3 seconds because that’s how much damage the rune is currently doing; the values in the tooltip are pulling that information directly from the game (i.e we didn’t manually update the tooltip in 1.0.4).

Regardless, if we just wanted to nerf Trail of Cinders, we’d just say that we were nerfing it. We’ve made similar announcements in the past. This particular change is the result of a bug fix, however; if we called it something other than a bug fix, then we’d be lying.

Just something to consider… a way to keep the skill from going back to unviable. People obviously love the new ToC, based on the outcry from the players here. Hopefully we can reach a middle-ground, somewhere between 300% and 1500%.


Thanks for sharing this suggestion. I’ll make sure it gets passed on. :)

Prior to the skill revision in February 2012, this rune effect was enabled by a Crimson Rune, granting the following effect with a level 7 runestone: