A caster or mage type class, character, NPC or monster, is capable of using magical spells, skills or spell-like abilities to accomplish tasks rather than brute force and melee combat. It's generic names for people who use magic, or has abilities that seems to work like magic.

They are usually not excluded from melee, but they generally prefer (through AI or player choices) and excel in ranged spellcasting. This is the classic definition of a caster. Many spells used by casters are ranged, uses an Area of Effect or both.

In some cases the term caster just refers to a character or monster who are executing a skill or spell. 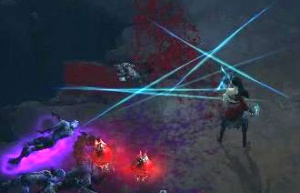 In Diablo III, the following classes are considered "caster" classes:

In Diablo II, there is primarily two caster classes and one hybrid:

All other classes uses mana for their skills and spells, but are more melee oriented.

In Diablo I, all classes can use all spells, but only the Sorcerer excels in spell usage.

Monsters that can cast spells are also called "casters". Their selection of spells varies but they are usually only able to use a few spells per type of monster. Here are a few examples of caster monsters:

A caster monster spell can be a spell used by a character class, a spell only used on scrolls or staves, or a custom-made spell for that monster. They include offensive and defensive spells.