Wolf Companion is a rune effect in Companion, a Discipline-spending Demon Hunter skill that summons a companion animal.

This rune effect summons a wolf, which attacks enemies for 60% of the Demon Hunter's weapon damage. Unlike the other animal companions which last indefinitely, the wolf only persists for 25 seconds.

As with most of other semi-passive attacks in Diablo III, the damage isn't very high, but the "fire and forget" function can make this companion a helpful asset, especially on higher difficulty levels against Elites, when the Demon Hunter has her hands full running, Vaulting, and debuffing the enemies.

See the Companion rune effects page for a more thorough description of the five rune effects in this skill, including screenshots, videos, and skill tips. 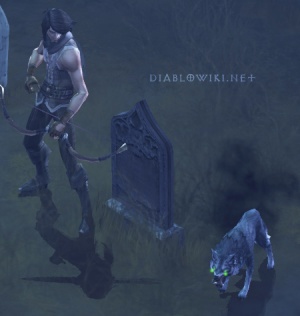 A view of the Wolf companion, obtained via datamining the beta client. The final game creature may very slightly in appearance.

Prior to the skill revision in February 2012, this rune effect was enabled by the Crimson Rune, granting the following effect with a level 7 runestone: