Arcane Power is the resource used by for the Wizard for casting her spells. It was revealed as the replacement for Instability by Jay Wilson at GamesCom, in August, 2010. [1]

The Wizard's Arcane Power resource works like a very fast-filling mana globe, that can not be increased in amount. Her amount of Arcane Power is set, but skills and passives can increase the amount by a small margin or increase the regeneration rate. This should allow the Wizard to cast low level spells without pause, while higher level spells will drain the globe more quickly, and thus have to be used more sparingly.

The main difference between Arcane Power and Mana is that the pool for Arcane Power is a fixed value. The default value is 100 but can be increased or decreased by Wizard skills (Energy Armor) and Wizard Passives (Astral Presence) by a small amount.

The basic play style of the Wizard in Diablo III is meant to be as a glass cannon. The character is able to attack constantly, but is not strong or durable, and must avoid taking much damage from enemies. Instability attempted, unsuccessfully, to create this by making her "more blasty and more vulnerable." Jay Wilson established that when talking about their goals for wizard design goals in October 2009. [2]

Jay Wilson: "Well for the Wizard we want to enforce the fact that she’s a glass cannon. I don’t think it’s fun to ever run out of mana. I’m not really interested in an extended resource for her. For the Witch Doctor we’re okay with mana, since he’s got some pretty good skills to recover mana that also double as attacks. And he’s not defenseless when he’s out of mana. He's got pets and ways to attack with them that aren’t mana intensive. For him that makes mana fairly interesting."

"For the wizard, when she’s out of mana she just dies. And that’s not fun. So if anything, we want to encourage how she plays. So she’s the kind of character that blasts first and asks questions later. Very vulnerable. So we want to implement a system that makes her more blasty, but even more vulnerable. We want to make that a choice for the player. "Do I want to make myself more vulnerable in exchange for being more blasty." And that’s a cool gameplay pull there."

Arcane Power sounds like it enables this by giving a resource pool that's never really empty, but that will run down if big, powerful skills are used rapidly. Thus wizards in Diablo III should always be able to cast some of their lower level spells, but will have to be more selective with using the bigger, more AP-expensive spells.

In October 2010, the developers weren't entirely happy with how the resource functions and were still considering dumping it and returning the Wizard to mana. [3]

Jay Wilson: "The Wizard—we’re still having a debate about whether her resource should scale or not. Right now, Arcane Power does not scale, and that’s the big difference between the Wizard’s resource and the Witch Doctor‘s mana; the Wizard’s resource does not scale up over time. Otherwise they’re very similar. If we change that about mana the Wizard might just go to mana and we’d change the Witch Doctor’s to something new."

Arcane Power is newly-revealed and there are yet very few details about it. All that's known about this resource is what Jay Wilson said about it in August, 2010. [4]

Jay Wilson: "For the Wizard, we could not get a version of Instability that we liked. The last version involved buff and debuff that would hit the wizard whenever she went unstable. And it was a pretty severe buff. It doubled all her damage taken while increasing her critical hit damage. And it just didn’t affect how people played. They didn’t notice it, and when they did it didn’t change what they were doing. That’s not the point of a resource. It needs to be managed to change the way that you play."

"So now it’s called Arcane Power and it’s not dissimilar to mana, in a lot of ways. It regenerates very quickly, but it doesn’t grow over time. It’s a flat amount. A lot of passive skills that enhance it." 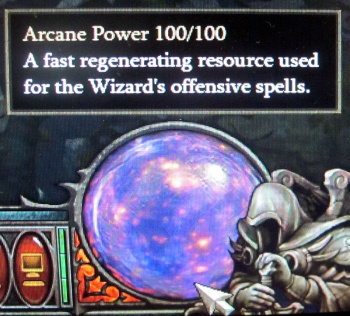 Arcane Power sounds very much alike to the Rogue's Energy resource from World of Warcraft. In that game the Rogue character has preset amount of a resource that recovers very quickly, allowing for constant attacks.

The name "Arcane Power" was assigned to a passive skill in the early development of the Wizard. It was present in the Blizzcon 2008 demo, but had been removed in 2009 and has never returned.

The description, taken from the Wizard skill archive article:

This mastery boosts the arcane spell damages by a much higher % than similar masteries for other types of damage, and it's unclear why. Possibilities include: arcane spells generally do less damage, their critical hit bonus might be less useful, or the spell just might be overpowered in this early, still-under-testing build.