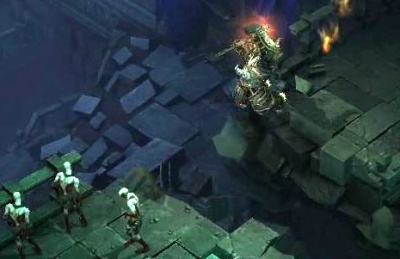 Leaping over a gap to unsuspecting zombies.

Leap (named Leap Attack prior to March 2012) is a Defensive Barbarian skill unlocked at level 8, making the Barbarian leap, causing damage and knockback upon landing. When using this skill the Barbarian leaps at a high rate of speed from his current location to the targeted spot, dealing considerable damage upon impact.

The rune effects provide a variety of modifications and bonuses, both to offense and defense.

This skill is one of the Barbarian's movement abilities.

Patch v1.0.4 improved Leap by making it a better movement skill. The Barbarian can now use it even while immobilized by CC effects.

The following is a very quick summary. Hover over the links for the stats of the latest live versions. 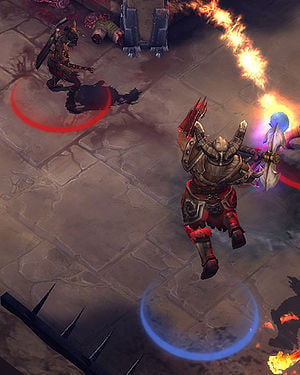 Leap has not changed much from D2, and has been demonstrated repeatedly in the gameplay movies. The main difference with the D3 version of this skill is that minor damage is dealt to everything nearby when the Barbarian lands, rather than major damage to one particular monster.

A video of Leap in use can be seen below, courtesy of the DiabloInc You Tube channel.

The following Barbarian passives provide a benefit to Leap, runed or not: 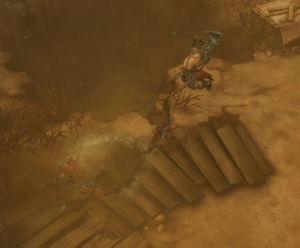 Leap (as Leap Attack) was revealed at WWI 2008 when Diablo III debuted. Originally, it was a Tier III skill in the Berserker Skill Tree. By BlizzCon 2009, Leap Attack was at Tier IV but was otherwise unchanged.

At BlizzCon 2010, with just one point in it the Barbarian could leap all the way to the visible edge of the screen, over any number of enemies, and at a very high speed. Flux enjoyed using it in the Battle Arena:[2]

Skill tiers were removed for the July 2011 Press Event, allowing skills to unlock steadily from levels 1 to 30. Consequently, all skill levels were adjusted and Leap Attack became a level 6 skill.

Leap seems to combine Leap and Leap Attack from Diablo II, whilst requiring Fury to use. The main difference with the D3 version of this skill is that minor damage is dealt to everything nearby when the Barbarian lands, rather than major damage to one particular monster.

Leap can be seen in action on video here: