The Berserker skill tree is a Barbarian skill tree themed with a ferocious fighting style, and has skills to reflect this. 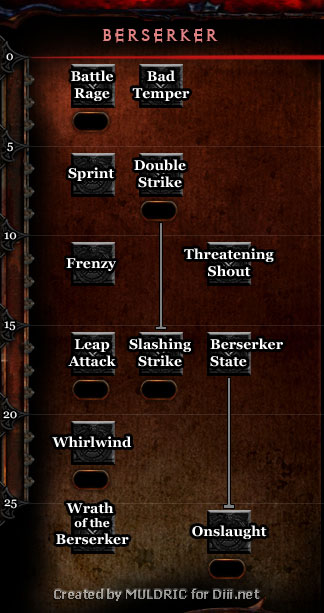 Berserker Skill tree as of BlizzCon 2009.

The Berserker tree focuses on creating barbarians whose main role in battle is to deal damage to multiple enemies at once, to buff himself to become better at it and to maintain fury so he can continue fighting at a fast pace. As such, the tree has skills that the Barbarian can use to buff himself, making him stronger, to hit multiple enemies at once and to be faster than barbarians of other builds. Also, like any skill tree focusing on any element of gameplay, it cannot be called a skill tree if it doesn't have signature skills that can actually kill. Luckily for us, the Berserker tree has a few cool skills that makes enemies easy to kill, like Battle Rage, Leap Attack and Whirlwind.