This page archives the original version of the Monk's skill trees, for future curiosity. This page is not to be updated with current info; see the Monk skills article for the latest information about this class' skills.

Back when only eight of the Monk's skills had been revealed at Blizzcon 2009, Jay Wilson gave some hints about what other powers the character was going to demonstrate. [1]

Diii.net: We saw eight Monk skills at BlizzCon. All were melee offensive or defensive. Can you give us some idea of what other types of skills the character will have at his disposal?
Jay Wilson: Most of the Monk’s skills will focus on combat skills and attacks, along with his various escape skills. And we talked at Blizzcon that we’re likely to put some defensive and supportive abilities on him. Possibly Auras. We’ve not done the next round of skills on him yet so we’re not exactly sure.

The Monk skill trees as revealed at BlizzCon 2009 were clearly works in progress, with temporary names and the skills assigned to the trees at random. There were no prerequisites or synergies of any kind, and it's highly likely the Monk's skill layout will be entirely different when we're next given a look at them. 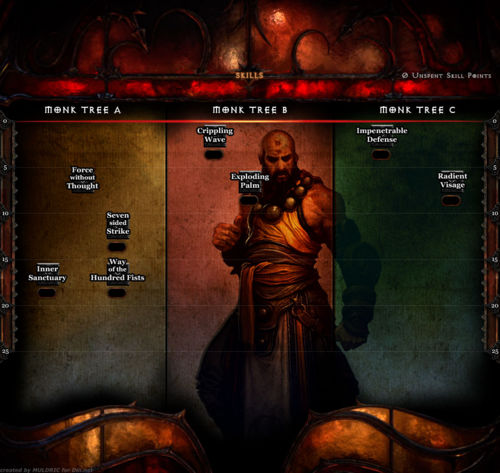 This tree had 4 of the 8 skills, with a level 5, 10, and two 15s. All the skills in the 1, 5, and 10 tiers had points invested in them already, so they could be used from the very start. There were only 2 level 15 Monk skills in the 2009 Blizzcon demo, the only two Monk skills without points already in them on the demo character, and both were in this tree. Both were fairly cool to use, too, though 100 Fists was the clear champ of the two.

This tree had only two skills at the Blizzcon 2009 reveal, both combos.

This tree also had just two skills at the Blizzcon 2009 reveal, both defensive in nature.

Skills that were once used by the Monk, but that were removed during development. The Monk has far fewer of these than the Barbarian, Wizard, or Witch Doctor since the Monk was the 4th character revealed, and only 8 Monk skills were shown before the big passive skill / traits switchover.

Impenetrable Defense, Radiant Visage, and Force Without Thought were removed from the Monk's skill listing between Blizzcon 2009 and Blizzcon 2010.