Seven Sided Strike is a Focus Monk skill unlocked at Level 17. The Monk uses holy magic to attack multiple enemies at once. 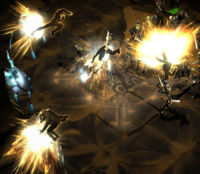 The Monk transcends, calling the holy Light to gain supernatural speed, hitting multiple foes in the span of a second.

The following is a very quick summary. See the Seven Sided Strike rune effects page for a more thorough description of rune effects, or any of the individual rune pages for numbers, screenshots, blue quotes, and much more.

A very fun skill. Much like a finishing move in a fighter. Jay Wilson described it as "Human Chain Lightning."

A video of Seven Sided Strike can be seen below, courtesy of the DiabloInc You Tube channel.

The following Monk passives provide a benefit to Seven Sided Strike, runed or not: 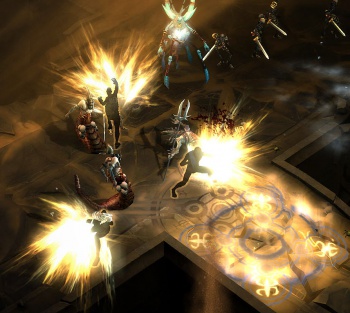 Seven Sided Strike was first shown at BlizzCon 2009 as one of the originals when the Monk was unveiled. Flux was able to try it in the gameplay demo:[1]

This one was best used on single or double targets, ideally a boss that needed finishing off, especially a teleporter or another elusive one, since all the hits would go to it in rapid succession, and hit it no matter how it squirmed.

See the Monk skill archive for more details on previous versions of Seven Sided Strike and other Monk skills.

Seven Sided Strike can be seen in action on video here: