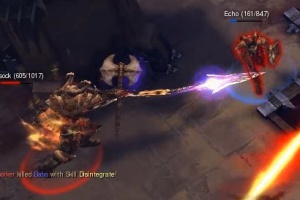 Ancient Spear is a Might Barbarian skill unlocked at Level 9. The Barbarian fires a mystical spear to snare his foes and haul them back into melee range.

Though a very fun skill in concept, this one saw virtually zero use in game shortly after Diablo III's release. Barbarians never needed to chase after just one enemy, and had many better fast pursuit skills to use instead of this one. Ancient Spear seems destined primarily for use in PvP, and it's expected to be popular come the introduction of the Arena.

Prior to the reveal of the skill rune names, this ability was widely-referred to[1] as "Ancient Harpoon" for fairly obvious functional reasons. Spears are not barbed and do not have ropes or chains attached to them. Harpoons, on the other hand, are barbed and tethered, since they are used to reel in aquatic life forms.

This skill was boosted slightly in v1.0.4, though it remained a novelty in PvM play, even after the improvement.

The following is a very quick summary. See the Ancient Spear rune effects page for a more thorough description of rune effects, or any of the individual rune pages for numbers, screenshots, blue quotes, and much more.

The following Barbarian passives provide a benefit to Ancient Spear, runed or not: 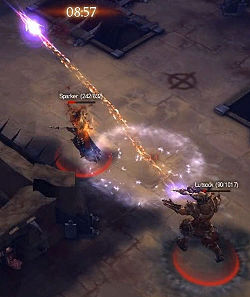 The skill is a ranged attack that spears enemies and pulls them into melee range, where the Barbarian, should he react quickly enough, can chop them to bits.

This skill is highly viable in the Battle Arena where slippery ranged attacking Wizards and Witch Doctors are in desperate need of some "Get over here!" as far as the Barbarian is concerned.

The skill can also be used effectively in PvM, ideally on back row attackers like archers or shaman, who the Barbarian wants to kill but can not reach through their defending meat shields. Enemies all the way to the edge of the visible screen can be skewered and pulled in, when targeted accurately.

Ancient Spear made its first public appearance at BlizzCon 2010, where Wyatt Cheng briefly discussed its development:[1]

Flux found it difficult to use in the Battle Arena:[2]

...Ancient Harpoon for ranged attacks (though I never actually saw this successfully used, since hitting moving targets was tough)...

He did, however, suggest that it could be useful against Wizards who rely too much on Disintegrate.

Skill tiers were removed for the July 2011 Press Event, allowing skills to unlock steadily from levels 1 to 30. Consequently, all skill levels were adjusted and Ancient Spear became a level 21 skill.

Ancient Spear was moved to level 22 for the beta. With the Patch 13 changes, it was classified as a Might skill and moved to level 28. For Beta Patch 14, it was dropped down to level 9, making it available in the beta.

Ancient Spear can be seen in action on video here: